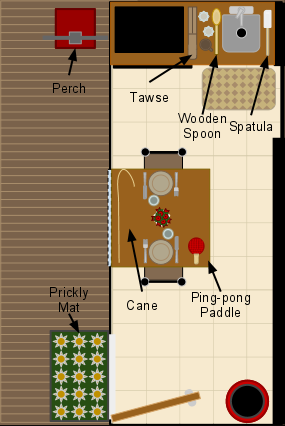 It’s solution time! That’s right folks, today we’ll take a virtual walkthrough and discover all those pesky (apparently grotesque and unrecognizable) implements. For all those who played along privately, I hope you enjoy the tour and for everyone else... well, there will be a new story up on Monday.
So, starting on the deck (yep, that’s wood plank decking outside the apartment and it’s supposed to be brown, of the milk chocolate variety) there are two pieces to capture your attention. The first, I’ve called the perch and it would be an extra credit disciplinary tool for all those who were looking for things beyond the basic 20. Essentially, the perch is a nice (or is that unpleasant) place for a spanked schoolgirl to stand with her bare (and likely red) bottom on display for all her dorm / housing mates. More details on that will come in the upcoming stories.
Second, still on the deck, is a nice (are those daisies?) welcome mat. You probably know the sort (unless you live in a cave. Please don’t be insulted if you do.) with the prickly green stuff (no, I don’t know what it’s called, do you?) that would be (cause I swear I’ve never had the experience, honest) incredibly uncomfortable to kneel upon after or even before or far, far worse during, a spanking. (Yeah that was very nearly and quite probably a run-on and 0n and on and on sentence.)
That’s all (folks!) for the outside at least. Let’s take a step inside and see what we see. (Okay, right, I’ll see what I see and you see what you see cause sharing eyes is a little more intimate that we probably are or want to be.)
In case you were wondering, that’s ceramic tile below your virtual feet. (Isn’t it pretty?) I know, I know you aren’t looking at the floor cause there is stuff on the virtual table that’s really caught your eye. Yep on the table, on the left by the window (yes the blue streak is a window or a virtual one anyway) lays a rattan cane (or as I call them, a “rotten” cane). That’s the first of the twenty for those keeping track.
I’m sure the lovely bouquet of flowers in the center of the table has kept you distracted (or maybe it was the cane or the plates or the glasses or the flatware or the horrible depictions of all of thee above), but sitting (no there really isn’t a butt in the chairs) on the right, bottom (still no butts here) of the table is a glorious, world champion’s ping-pong paddle. (Okay maybe it was only campus champion, and in the nerd league to boot, but a champ is a champ or is that a chimp?) I never knew this, but (still no butts) apparently the color of a ping-pong paddle can be imparted onto skin and this is particularly so for red ones, hence this paddle is red because I’m sure no one here has a fetish about blue, green, orange, or yellow butts. (Yep, it’s all about the red bottoms, butts, behinds, backsides, booties, and bums.) Ping-paddle is number two of twenty.
Walking forward a little, we, or at least I, discover a kitchen sink. (Yes, that’s right, not only did I include twenty plus implements, but I threw in the kitchen sink as well.) Now, on the counter, next to the kitchen sink, are three very easily discovered (if not recognized) implements. Starting next to the black box (no it’s not part of a downed airplane telling inspectors what happened in the last thirty seconds of flight) the first is supposed to be a leather tawse. It’s of the two tail variety and I’m guessing it’s next to the sink because it’s just been oiled (probably not with Crisco since no one is on that perch outside). This is our 3rd of twenty disciplinary tools laying around.
Keep going to the right, past the dirty coffee mug and glasses (if they aren’t dirty they really shouldn’t be sitting out on the counter, now should they?) a rather obvious kitchen spanking implement known as a wooden spoon lays conveniently next to the sink. That would be disciplinary tool number four of twenty.
Crossing over the sink, on the right edge of the stainless steel water pit, is a spatula. Looks like it’s the type with a rubber end, great for licking (chocolate cake batter preferred by me, but I think you all know the other kind of licking it gives). So, wood handled, rubber tipped spatula make five of twenty.
And that covers the entry / kitchen area of the apartment.

As we leave the kitchen and enter the main room of the apartment, there are two study (well that’s what most desks at college campuses are used for, isn’t it?) desks. The desk on the left features a lamp, a computer monitor, a book, a notepad, and a pencil. Now what among those innocuous items could possibly have anything to do with discipline? (Okay, so no one reading this is probably having any trouble coming up with the answer to that, but I had to ramp up the suspense some how.) The book, notepad and pencil can be used together for the purpose of writing dull, repetitious phrases in an effort to implode the poor schoolgirl’s mind. (Sure, implosion is a bit strong or strict, but copying out of a book is not only incredibly boring, but it could be detrimental to a schoolgirl’s college career if she decides to do so at the wrong time, like say for finishing homework.) Those three item together make number six of twenty.
The desk on the right is similar to the desk on the left. (Life is fair and balanced until it isn’t. This is a common factor in teacher mentality when dealing with troublesome students. Don’t ask me how I know.) I’m sure the missing book catches your eagle-like awareness. Still a pad of paper and a pencil can be used to write a line (predefined by an uptight, nasally inclined professor) over and over and over and over and over and.... well you get the picture and if you don’t just right click and select save image to disk and you will. That would be unlucky number seven of twenty.
Also, sitting on the desk on the lower right edge is a ruler. It’s not a yardstick, I swear. For those who know (and if you’re reading here, I think you know) a ruler, especially a wooden ruler, is a good way to make a schoolgirl measure up. She can check the length of her skirt, the straightness of her lines, and the distance between two points, but of course that’s not the kind of measuring we’re talking about, now is it? The ruler would be (and is) number eight of twenty.
If you found anything else at the desks, I think your stretching, but I suppose the monitors could be used for punishment if you made the poor schoolgirl watch a dreadful movie or look at spanking pictures. The lamps might be another option if you like making “burn” a reality, but that’s probably a little over the top and really sheds light on your sadistic tendencies. As for the chairs, well I think short of, and you might actually need to be tall, bending over the back of them, they don’t really offer up anything useful to the disciplinary process. Well, I guess you could take them away and make the poor girls stand at their desks, but then the chairs really aren’t a disciplinary tool, just their absence.

Moving on into the apartment and turning our virtual backs to the virtual desks, there exist two virtual beds among other things. The first bed, the one on the left, (yeah the rectangular shaped thingy) has a nice little chest of drawers at its foot. (Don’t ask me how or why beds got feet, but I promise it has nothing to do with my drawing, or lack thereof, skills.) On top of the chest of drawers, there are two implements. 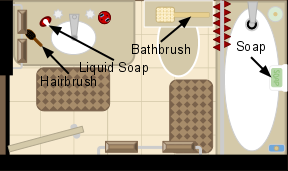 Time to go to the bathroom. What? You don’t need a pit stop? Fine, fine, let’s just all go together. (If you’re expecting a peepshow, you’re on the wrong blog.) As soon as you get inside you look over to the vanity and if you’re really smart, you’ll notice the hairbrush hiding in plain sight. Call it a cheat if you will, since we already had one hairbrush, but hairbrush number two (get your head out of the sewer, just cause we’re in the bathroom doesn’t mean number two refers to anything special) is disciplinary tool number eighteen of twenty.

Move in a little farther and look on top of the toilet tank. If you guessed it was a toilet brush sitting there, you’d be wrong. It’s a bath brush and conveniently laid out to be grabbed from inside the shower. Of course no one wants to feel that thing slapping there bare bottom while it’s (could be there bottom or the brush, take your pick) wet. The bath brush makes nineteen of twenty.
Inside the shower is a little green bar of soap. It looks little here and seems very sanitary and appropriate, but when it’s slipping (suds, slime, and shavings all being left behind) in and out of your mouth, it looks a bit different. Bad words and bad attitudes can get this old-fashioned discipline tool into modern use. The bar of soap is implement twenty of twenty.
Did you find them all? Did you find any of the extras like the liquid soap next to the bathroom sink? Did you find any that I didn’t mention? Did you have a little fun? Well, I did and I hope you all did as well. The Jade Runner returns on Monday as I go back to school. For now, The Jade Runner will post on Mondays and I’ll try to share something else on Fridays, but I can’t promise anything regular at the moment and yes, I know I owe a few emails and some replies to the comments which I’ll get to in the near future.

Thanks for reading and commenting,
Ash
Posted by Ashley J

Ash, ingenious!
I'm glad that you are back to fairly normal (sic)!
Love and warm hugs,
Paul.