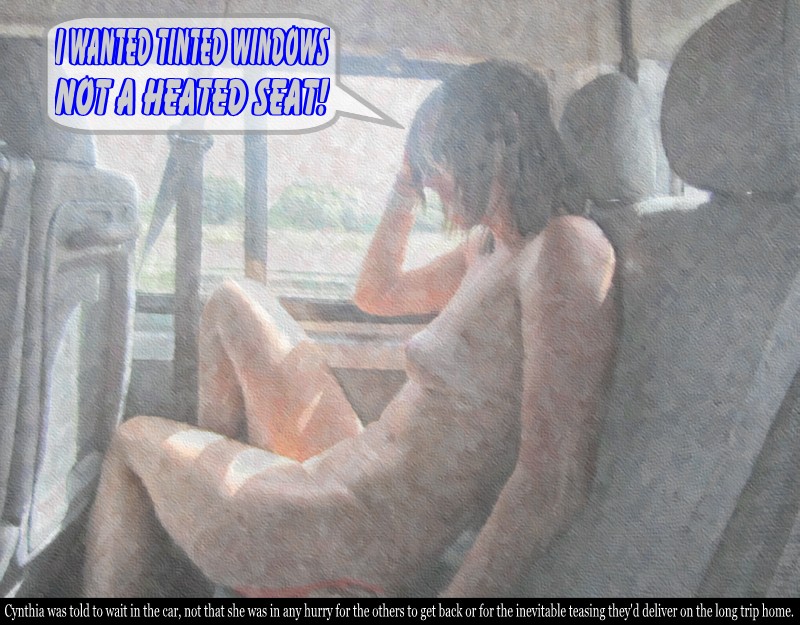 Dad’s belt zipped through the air striking Cynthia’s reddened buttocks one final time. The tears stung at her eyes and she could feel the eyes of the rest of her family staring at her with the same cold disapproval her father’s demeanor exuded. She pushed herself to a standing position, a mere step away from the family car’s rear bumper and successfully fought the impulse to assuage her stinging butt with a quick massage. The family was watching and she didn’t want to give them any more of a show than they already had seen.
“Wait in the car,” Dad said, pointing toward the backseat as if she didn’t know where to go, “and I don’t want to hear another word out of you before we get home.”
Cynthia nodded, keeping her lips tightly sealed and avoiding eye contact with her father. The car was parked on the shoulder of the road, but luckily there had not been any traffic speeding past while she’d been bent over. The asphalt felt like hot coals beneath her feet as she took the few steps to the rear door on the passenger side of the car. She plopped herself down hard on the seat and immediately regretted it. Frustrated, embarrassed, and annoyed, she slammed the door closed with an unsatisfying clunk.
She watched the road rather than her family. The quiet in the car was immensely preferable to the teasing she knew they would soon be delivering. It was always the same. Her brother would tell her she was positively glowing. Her mother would comment; Now that you’re well red, I hope you’ve learned your lesson. Her father would chuckle at every word while watching her expression in the rear view mirror. Cynthia would be tempted to stick her tongue out, to yell, to scream, to blame the world, but the tenderness and the itching warmth consuming her backside would temper her responses. She would keep her mouth shut and keep her thoughts to herself. A blush would color her cheeks with the embarrassment swelling up inside her and she would avert her eyes from the family, anything to avoid them seeing the effect of their teasing glistening in her eyes.
A single car whooshed by on the road. The look on the driver’s face stuck in Cynthia’s thoughts. It was clear enough, he had seen her naked breasts peeking out from just above the lower rim of the window. There was no place to hide and the tint on the windows was insufficient to disguise her humiliation from the world. Everywhere she looked, even looking back at her own actions, was an embarrassment. She rested her head on her hand, elbow planted on the lip of the window, and closed her eyes. It was going to be a long trip home.
Posted by Ashley J

A very evocative little teaser, to match the picture, Ashley.

But we still don't know what the poor girl did to land her in this predicament.

Looks like she would rather be almost anywhere then have to wait in the car. that place seems like it would be really embarrassing but most likely very effective
AL :}

Karl, I thought for this time, I'd leave it to every ones' imagination.

Al, I'm pretty sure sitting in the backseat of a car without any clothing on is embarrassing, not that I would know anything about it personally.

Ash, I can think of several scenarios to leave her in that predicament.
Nice one dear girl.
Love and waem hugs,
Paul.

Paul, Yes, I could probably write a dozen different scenarios for her predicament and still have a few ideas left over.

Please give us more, sweetie!