Quinn stepped in front of Kit, placing himself between her and the orange collared man. “Is this really necessary?” he asked.
Kit laid a hand on Quinn’s shoulder. “It’s alright,” she said, “he just wants to prove he’s the one with the power.”
The orange collared man produced a leather strap from inside his white coat. The smug confidence sparkling in his eyes proved beyond any doubt he had done this sort of thing in the past. Rex’s grin and stance indicated he not only knew it, but had counted on it. Tara recognized the signs, knew with the right words she could probably end the whole thing right then and there. She remained silent, afraid to draw attention to herself, afraid she might make matters worse rather than better. Because that’s what always happened when she tried to do the right thing.
“Get your clothes off,” the orange collared man said, looking at Kit.
Kit reached inside her jacket and lifted both pistols from her waist. She kept them pointed at the deck. Her eyes pointed at the orange collared man.
“D-don’t d-do,” the orange collared man said, “an-anything you’ll r-regret.”
Kit said, “I’m not getting naked for you.”
The orange collared man straightened his spine. “You agreed to a spanking.”
“Yes, I did,” Kit said. “I didn’t agree to humiliation.”
“Well it’s not a spanking if it’s not on the bare,” the orange collared man said.
Kit glanced at Quinn.
Quinn shrugged. “The man’s got a point. I’m sure you can just bare your bottom though and that’ll satisfy everyone.”
Kit handed the pistols to Quinn and shook her head at the orange collared man. Her fingers unfastened her belt and opened the front of her jeans. She let the jeans fall to her knees and slipped her finger into the waistband of her panties. Her eyes glared into those of the orange collared man. She yanked her panties down until they rested inside the top of her jeans around her knees. Her hands folded together, covering herself in front.
“Let’s get this over with,” she said.
The orange collared man nodded and stepped up to take position beside and behind kit. “Bend down,” he said.
Kit leaned forward resting her palms on her knees. The air in the cargo hold felt sticky. She could hear the breathing of her friends, of Rex, of the orange collared man, and of the arm of inspectors watching from outside the cargo bay. It should have turned her face bright red. Embarrassment should have flushed her skin from head to toe. The recent events in her life had changed her. She felt nothing about her predicament, not even anger.
The strap tapped against her exposed butt. It was soft and worn with use and age. The orange collared man drew it back and snapped it through the air, cracking it against her bulging flesh. Her buttocks wobbled and bounced. A red stripe rose to the surface of her white skin. Kit blinked and breathed like normal, like she was still waiting for the first stroke to fall.
“You know I’m doing you a favor here,” the orange collared man said.
Kit looked through her arm at him. “I agreed to a spanking not a lecture. If your finished, I’ve got a delivery to make and if you’re not, you’re wasting time.”
The orange collared man raised the strap and slashed it down on her buttocks. He didn’t wait for the next stripe to raise, but instead raised the strap again and whipped it through the air toward her waiting backside. His arm began to blur with the speed of his motion as he strapped her naked butt with all the vigor he could muster. The cargo bay echoed with the crack of leather snapping against raw skin and the labored breaths of the orange collared man.
Kit blinked in tune with each impact. She maintained her breathing, controlled and even, unaffected by the sting of the strap. Her butt turned from white to red, to dark red. The redness rose in stripes identical in width to the strap and each stripe brought with it a warmth that built steadily on stripe after stripe until her bottom felt ready to ignite in flames. A tickling sting spread across her naked, bouncing flesh. She felt no remorse and there were no tears in her eyes.
Having landed at least fifty strokes, the orange collared man stopped swinging his arm and consequently, the strap. “We’re done.”
He tucked the strap back inside his coat. Kit straightened and pulled her clothes back into place with her back still to the orange collared man. From the corner of her eye she caught a nod between Rex and the man. It served only to confirm the suspicions already circulating in her head. The orange collared man descended the ramp and joined his army of inspectors. Without a backward glance they left the docking bay.
Kit looked at Rex. “I ought to throw you out the airlock just as soon as we clear the station.”
Rex laughed. “Suit yourself, but you’ll only have yourself to blame when you find yourself being hunted all over the galaxy.”
“You’re not that important,” Quinn said, “or that well liked.”
Rex said, “No, but our cargo is. You get rid of me and you won’t know where to deliver it or to whom, but the people who are expecting it, know who you are. Throw me out the airlock and you might as throw yourself out too.”
Tara said, “We aren’t actually going to deliver this shit are we?”
Kit scowled at Rex. “We don’t have a choice. We’ve accepted the job and money has already changed hands.”
Rex nodded. “Yep, I had you pegged from the moment we met. It’s always all about the money.”
Kit’s hands pressed against her tender backside. “Let’s just get out of here and get the job done.”
Posted by Ashley J 2 comments:

Girl in the Window 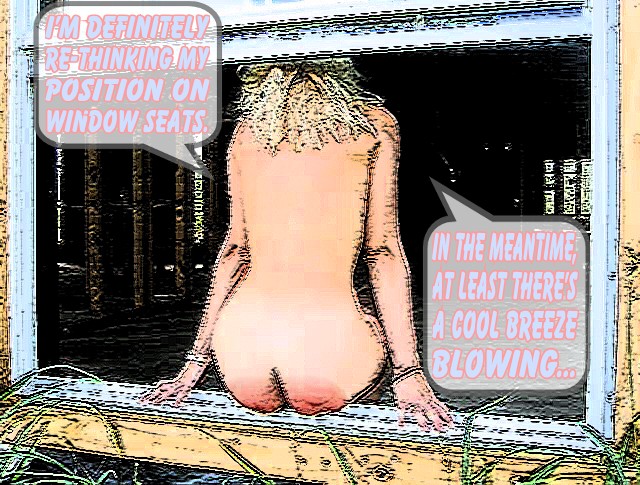 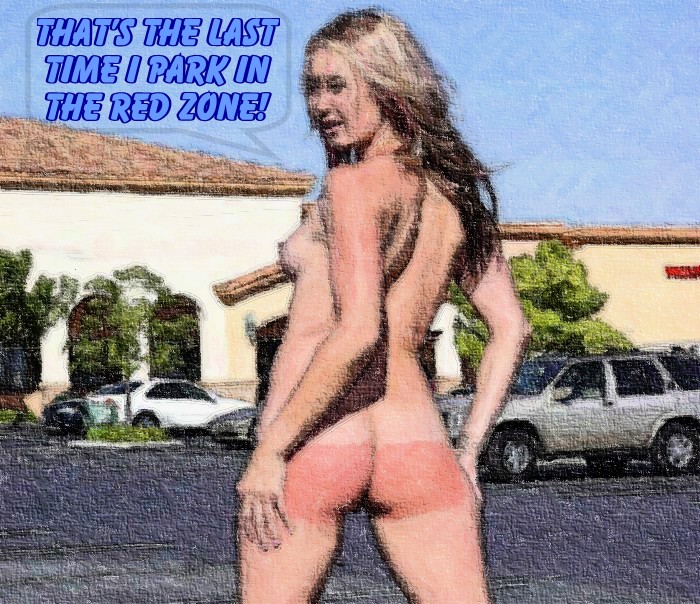 Tara rode the elevator up to the control center fuming over the evidence of betrayal she found in the cargo hold. The doors opened and she stormed forward passing the ship’s library on her right until she stood in the doorway of the helm and navigation center. Kit sat with her back to the door, studying the controls and making course corrections as they approached the docking bay of a large orange station. The navigation chair sat empty and no one else could be seen or heard.
Waiting until the delicate maneuvers needed for docking were complete, Tara stood clenching and unclenching her fists. When Kit’s hands left the control and the ship sat docked in the bay, she asked, “So how much are they paying you?”
Kit spun fast in her chair to face Tara.
“What?” Kit asked, startled and confused by Tara’s presence and accusatory tone.
Tara planted her hands on her hips and shook her head, like a scolding mother. “I just want to know, how much was my life worth?”
Kit blinked. She had planned on telling Tara everything, but she hadn’t counted on Quinn telling her first. The timing could not have been worse. Kit said, “It wasn’t like that.”
“No?” Tara said. She stepped forward and glared down into Kit’s eyes. “What was it like then? Don’t tell me you and your merry band of petty criminals really thought you were doing me a favor?”
Kit looked up into the angry face looming over her. “I’m just trying to make things right.”
“For who?” Tara asked. Her hands twitched at her sides with a growing urge to wrap her fingers around Kit’s neck and squeeze. “For LX? For you and your shipmates? Cause you sure as hell aren’t doing anything good for me.”
“What else can I do?” Kit asked. “I never intended for you or anyone else to get caught up in my mess, but I can’t change what’s happened.”
Tara shook her head. “So you are the thief.”
Kit lowered her gaze. “I am, but it’s not that simple.”
Tara rolled her eyes and laughed. “It’s not that complicated, little girl. You either thought you needed the money or thought you needed the high. Either way, you didn’t stop and think about the consequences of your actions.”
Kit blinked. Tara’s words weren’t adding up to the reality Kit understood. “I’m not a druggie,” Kit said.
“User, dealer, or smuggler,” Tara said, “you’re all part of the same fucked up soup to me.”
Kit stared up into Tara’s eyes. “What the hell are you talking about?”
“Don’t play stupid,” Tara said. “I looked in the cargo hold and I know you’re running narcotics for LX.”
Kit’s eyes opened wide. She glanced around behind her, looking out the window to the docking bay beyond. “I’m going to kill him.”
Tara read the truth of shock in Kit’s eyes. “You didn’t know did you?”
Kit shook her head. “I would never do business with LX. They killed my sister.”
Tara blinked as her mind raced to retrace their conversation with new understanding. “What the hell did you steal from them?”
Kit said, “The drug money you were convicted of stealing.”
Tara shook her head. “I wasn’t convicted of stealing drug money. I was convicted for stealing pharmaceuticals. They would never bring anything to do with their narcotics trade to the authorities.”
“But you didn’t steal them?” Kit asked.
“Of course not,” Tara said. “I found out about the narcotics they were slipping into hospital pharmaceuticals and they framed me for theft to discredit my claims with the authorities trying to investigate them.”
Kit nodded. That was exactly how Jade had got caught up in the mess that killed her. There was never enough proof for the authorities to do anything and now it was clear why no one would step forward. Those that even though about it, would end up like Tara did. Kit said, “I’m guessing their tactic worked?”
Tara nodded. “I don’t know for certain, but it’s a good bet the authorities I was working with will find their case falling to pieces without me to back things up.”
“Maybe we can do something about that,” Kit said, “but first we’ve got a more immediate problem.”
“What?” Tara asked.
Kit stood up and signalled for Tara to follow her as she headed toward the elevator at the back of the ship. “We just docked with a customs station and if the inspectors look inside our cargo and see what you saw, we’ll be spending the next twenty years digging ore on some miserable asteroid.”
Tara said, “You’re really not very good at this, you know?”
Kit glanced at Tara as they stepped inside the elevator. “At what?”
“Smuggling,” Tara said. “First of all, you should never go anywhere without knowing what you’re carrying in your hold and second, if you’re carrying illegal goods, it’s a good idea to avoid customs or at least have a plan for getting past them.”
The elevator descended through the ship toward the first level. Kit shook her head at Tara. “You’re starting to remind me of my sister. She always had a load of good advice too. And she had a penchant for offering it up right after the shit hit the fan too.”
Posted by Ashley J 4 comments: 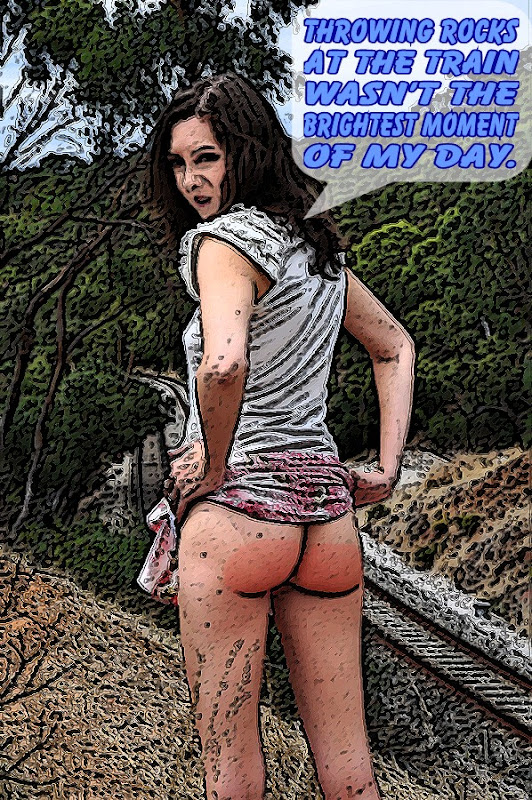