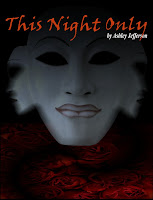 "Rebecca," He said, his voice quiet like a whisper, but devoid of the warmth with which he customarily addressed her.
His hand grasped her wrist, forcing her to stop walking away. Her breath caught in her throat when she found the firmness of his hold prevented her from simply pulling free. She turned to face him, raising her free hand to slap him for his audacity, but he was waiting and grabbed her other wrist before her effort approached anything akin to success. The smile on her lips fell flat.
Untwisting his arms, he spun her around and pulled her back into his body where he could hold her pinned to his chest with a single arm wrapped around her. Far from accepting his superior strength as superiority, she struggled against his hold until he turned her loose with a push toward the wall. Wobbling on her stilettos, feet scrambling as if the tile had turned to ice, Rebecca steadied herself against the wall and glared up at him. With the index finger and thumb of his right hand he pulled a neatly folded, white handkerchief from his jacket pocket and held it out in the air between them. She looked from it to his eyes and when their eyes met, he opened his fingers allowing the cloth to fall freely to the floor.
"Pick it up," He ordered.
Download the complete story, free at Lulu.com!
Happy Halloween,
Ashley J
Posted by Ashley J 1 comment: