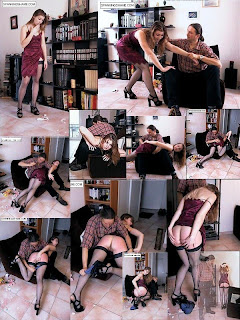 Franny throws the best parties. Everyone knows it, but to actually get invited to one was the event of my year. You see, Franny and I went to school together and we were such good friends we could pass each other in the hall and never know it. Back then, I really did not care, but these days, who you know is a little more important and knowing Franny is good for my career. That is where Craig fits in; He used to date Franny, but now he dates me and somehow he managed to stay friends with her. Talk about good fortune.

“Are you ready?” I asked Craig, standing in his living room.

He said, “Give me five minutes and we’ll be out the door.”

I shrugged. Usually it is me we are waiting on and he is not very patient at those times, but I figured a little good behavior now could buy me a little lateness later. I turned my attention to his bookshelf. He collects all kinds of crazy things, knickknacks and random books on everything from Vampires to Ancient Chinese Weapons. A vase caught my attention with a horribly, ugly arrangement of silk flowers sticking out of it. I lifted it off the shelf and musingly turned it in my hands trying to figure out if the flowers were permanently attached or something he added.

Would you believe the thing fell from my hands and smashed on the floor? I stood there staring at it. The shards on the floor, the dust rising from the scene and the reverberating noise of the crash replaying itself in my ears, all told me it was real. I blinked, I pinched myself, I stomped my foot on the floor, but nothing would make the disaster retract itself. That is when I heard his footsteps.

“What the hell happened?” He asked.

“I’m waiting for an answer,” He said.

“Since when do things fall off my bookcase and end up three feet from where they were sitting?” He asked.

I shrugged and said, “Now?”

“I don’t think so,” He said, “and you certainly know that’s not what happened.”

I said, “I was just looking at it and it slipped.”

“And you couldn’t say that in the first place?” He asked.

“That’s what I thought,” He said, shaking his head at me. “You know I ought to give you a sound spanking for lying to me and a bare bottom spanking for breaking my vase.”

I nodded and said, “If you think it would help.”

I fluttered my eyelashes at him and said, “My bottom is all yours.”

“Aren’t spankings supposed to?” I asked.

He sat down in the nearby chair and pointed at his lap. I took baby steps to his side and looked down his lap with mock horror. He grabbed my arm and pulled me downward until I leaned into the force, throwing myself onto his lap. His hard hand patted my bottom. I purred in appreciation.

The first slap of his hand tingled like electricity sparking against my skin. I pushed my bottom up to meet his hand and he settled into a rhythmic smacking of my backside. I groaned and grunted as the sensations increased. It was nothing like the hairbrush spankings my mother used to give when I was a naughty girl. Craig’s hand was imparting as much pleasure as pain.

He paused and said, “You’re enjoying this way too much.”

“Would you prefer I cried?” I asked.

“I’d prefer you at least acted like you were sorry,” He said.

“I thought you were punishing me for lying,” I said.

“You’re right. I guess I’ll just have to step this up a bit,” He said.

His hand turned into a cast iron skillet. Okay not really, but the next spank felt a lot like it had. The analogy really held as he continued spanking at that level and my bottom began to burn. I bet you could have cooked a steak on that skillet in less than a minute. Craig just kept going. I squirmed and twisted, even yelped a few times but all for not. He was particularly displeased when I reached back in a futile attempt to protect my backside from his onslaught.

Shoving my hand away, he said, “What do you think you are doing? I told you this was going to hurt and I meant it.”

He pulled my dress up, exposing my panties to his view and as if that was not enough, he pulled my panties down too. I tried to stop him, but he easily brushed my hand away. Squirming on his lap, there was nothing I could do except wait until he was finished with me. My vision was full of the broken pieces of the vase on the floor and I was honestly starting to feel really bad about it.

Craig resumed his cast iron spanking efforts with gusto. I kicked, I pleaded, I offered sexual favors, and he laughed and spanked and kept on spanking. Every once in a while he would pause and pull my panties down a little farther until he eventually took them off me completely and tossed them to the floor. I held back the tears threatening to come, despite the frustration and helplessness of being trapped on his lap with my bottom on fire.

He stopped and said, “Now, what happened here?”

Frowning, I said, “I broke your vase.”

I shrugged. He spanked my bottom another dozen times.

He said, “Good now you can get up and go stand against the wall while I finish getting ready.”

Sliding off his lap, I reached back to check and see if my bottom was really ablaze. Against all odds it remained in place and flame free. It was however, hot to the touch and stinging more with every second that past. I climbed to my feet and grabbed my poor bottom with both hands, but they did nothing to assuage the discomfort Craig had imparted. He led me to the wall and placed my hands at my head. It was a familiar enough position; Mom used to make me stand like that, bottom bare and burning too. I guess some things never really change.

Thank you for that enjoyable story, Ashley. I especially like the touches of wit and humour.

Another Fine story, it looks like she was enjoying(At the beginning) the spanking or at least new she had it coming so did not fight it but I have to wonder if by the end she had other thoughts about it? cause she definitely felt it at the end...I also thought it was funny in parts too
Thanks AL:)

Karl, I love adding a touch of humor into my stories. The only problem I run into is sometimes my sense of humor misses the mark with my readers. Glad it didn't this time.

Al, Spanking and enjoyment go hand in hand sometimes, even when they aren't necessarily supposed to be that way. I suspect, at the end, she was still enjoying the spectacle despite the fact it hurt more than she expected.

Paul, You are welcome as always. This story turned out to be a fun little scenario with characters having almost as much fun. Imagine that. lol

Ash,
Another excellent story. I do love your humor and point of view. I wonder...did she do it on purpose to get a spanking...
Loved it,
razrstrpr

Razrstrpr, That is an interesting question and of course there is no story answer, but I think you might be on to something there. I always like to put a laugh into my stories, more than one when I can.