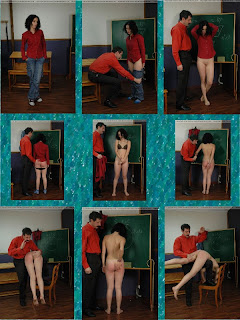 When I write about school spankings, I have a tendency to shy away from anything not college related. Personally, I just don’t like the idea of the publicly ran school system spanking. The college environment is much different, because it allows the creation of a fantasy environment not touched by the walls of everyday reality. For the most part, real colleges don’t delve into the spanking arena which makes the story safe for exploring all kinds of situations.

Another plus to the college environment is the student (aka spankee) is old enough to choose for themselves if they want to go through the disciplinary situation that is created or run away. Of course since I’ve created the character in the first place, I make the choice for them, but that is entirely irrelevant. The point is, the college school environment makes for a great setting where the story is free to explore institutional style discipline without the boundaries typically required by the school type spanking stories. I like this because when I write stories, I like to be able to follow the story wherever my characters want to take it and sometimes that is a very strange place.

What is not so great about the college environment is the lack of routine and structure most college’s employ in their operation. When a student can choose not to attend class, not to do their course work, fail tests, and hang out on the beach all day, the story can quickly lose its footing. Why would a student about to get an embarrassing spanking in front of their class even go to class under those rules? They wouldn’t, unless they were shooting for that embarrassing scene in the first place. Some people / characters are all for this kind of thing, but most of the characters I create have a healthy desire to avoid such things. Meaning, they will hang out at the beach if they had the choice, I know I would.

The easiest way to fix the problem is by adopting a structured environment of enforceable rules which dictate the students’ actions in a way that requires them to face consequences even when they would rather not. Although, in some ways the environment can feel more like a high school at this point, it is still representative of a small portion of faith-based private colleges. That allows an aspect of realism into the story, but small enough that I can still wander through the story with a minimum of disruption. Really, the lines drawn between fact and fantasy are irrelevant because the story from its inception is fantasy, but it is nice to have that feeling which suggests even though the events are fictional, perhaps the environment is real. It makes the fantasy palatable and just a touch more exciting.

What remains is the ability to pull the reader from their reality and suck them into the fantasy I’ve created. Maybe that could be said in a nicer way, I by no means suggest that readers suck or should be sucked, but it is important that while reading a story they can suspend their disbelief and become a part of the fantasy. This is of course the most difficult challenge every author faces and it is because individually we draw our own lines at what we will believe and not believe. As an author all I can do is create a consistent environment that follows its own rules without variation. If I can do that, then I have created a fantasy which should not disrupt from itself and if you dare to step inside, you might just lose yourself, for a time, in the characters and their stories.

The Spanking Chronicles of Cedar Lake: For the General Assembly is just such a story and it is available now for immediate download at Lulu.com.

ps. Don’t forget to stop by Imagine the Stories, tomorrow for my weekly short story. This week we have a housemaid with more attitude than cleaning skills. I wonder what happens to her?
Posted by Ashley J

That sounds like a good and workable strategy and context for school story writing.

Great story the Cedar lake, and as I probably do not have to mention i will not miss your weekly friday Pictales story,
AL :)

Ash, ok, ok, enough already, not only have I baught it, but read it. and emailed you.
Warm hugs,
Paul.

Karl, It definitely works for me. I'm always curious to see how others approach things like this.

Al, Thanks, glad your enjoying everything.

Paul, Thank you. I'll try not to drive you too nuts with my shameless plugs. lol

It is difficult to create plausibility in this environment. One way that I did it in a story I'm just finishing is to have the miscreant(s) choose CP. I had this idea of an old forgotten rule in the school charter that allowed a student to elect CP in lieu of suspension. Then part of the story becomes agonizing over the decision and convincing everyone to go along with it, e.g., parental permission, legal waivers, etc. Now you have something very believable.

Rollin, The school environment is definitely a tricky one to work with. I think you've got a good idea there for the school setting and it will certainly make for interesting conflict as your protagonist must not only choose to accept a spanking but to fight for it to happen.

I love the fact that you are sticking to those who have reached their majority. I strongly dislike stories about minors for obvious reasons, the lack of ability for consent. Great blog. :)

I have been snowed under with abominably boring moneymaking stuff recently and only came around to reading ‘Cedar Lake’ this weekend. It’s a gem! This enchanting novella deserves a much longer review than I have space for here. I’ll touch briefly on three points. Two of these – plausibility and school settings – we have started discussing already on this blog.

I share your view on plausibility. Authors are Gods. They create worlds. But to quote a scientist “God doesn’t play dice”, and once her ‘Fiat’ has laid down the laws governing her universe an author can’t change them. Readers accept the physics of the new world, or they fly their intergalactic mindships to new places. Cedar Lake’s rules are on the farthest fringes of fantasy, but they work! Consistent, inflexible (at every level!), they grab the reader and don’t let go.

I was all the more under the spell that school settings usually do nothing for me (no more than ‘romance spankings). So lethally unimaginative. Student misbehaves – teacher paddles student. Zzzzzzzzzz. You have completely subverted the genre. I would like to discuss in depth, but in a few bullet-point words I think your success owes to:

Rather than plot, though, it is characters that drive a good story. Kylie is Allison’s cousin – an unbreakable spirit, glued in a spider’s web of treasons, cheatings, lies and injustice. Allison had options opened to her; Kylie is totally powerless. That’s what’s exciting. Always punished, and yet we admire her. She is our heroin. A girl in my dreams. Do I need to say more, when I am writing to the creator?

Let me add three quick thoughts. Scott Ellis is a diabolically brilliant invention. As a male with a sadistic disposition (LOL) I identify with him, of course. So is it because they are ‘innocent’ and ignorant of the deeper corners of the human psyche that Kylie & friends imagine Scott has trapped them in order to increase his rag’s circulation? That’s crass American materialism (LOL again). What if Scott Ellis plotted his schemes only to place these girls under his thumb? I would (grinning!).

Where is page 82? Novellas often end on a kiss, but the characters here are not heading for marriage and many children. Kylie asserts she is unbroken, that’s the moral of the story; the ending, though, is frustratingly abrupt.

And a last last word: Cedar Lake is not fenced. We assume the students may call their parents and ride a bus home, when they want. The characters hate the harsh, frightening discipline, but somehow they accept it. We, the readers, are not voyeurs in a prison. That’s why we may get a kick out of your story without guilt.

An immense thank you
François

Vanessa, Thanks for joining in the discussion.By focusing on adult aged characters who don't always act their age, I think the stories are infinitely more enjoyable. A child in these situations is primarily a victim and when I write about spanking, I don't like to think about my main characters as purely victims.

François, Can I start by saying WOW? LOL. I was pleased to see you enjoyed the story. Your earlier comment in regards to plausibility had me mildly concerned you (and others like you) would find the story too fantastical to enjoy. This is basically because when many people talk about plausibility they are really referring to a story's realism. Spanking stories, at least the ones I write, are not meant to be overly realistic. They explore the fantasy, the world(s) in which spanking is an everyday, easily accepted part of life, and because of that, my stories can venture into territory a "realism" story can never go. The one caveat is whether or not my readers can come along for the ride or feel the need to jump ship when things stray too far from the "real world". Thank you for taking the time to review the story so in-depth here and please be assured, I welcome any further discussion on the story and its aspects be they positive or negative.

I attended a private school. One day I was sent to the head mistress' office with a discipline slip. Her secretary led me into a room next to her office. It had a curtained window, a desk and a chair. I was told to take my pants off but leave my underpants on and stretch across the desk. I was to wait that way until the head mistress came in. If I didn't, my underpants would be removed. She then opened the curtain so she and anyone coming into the office would see me. I waited. Eventually the head mistress came in. I got a lecture but no spanking.