We, my roommates, Amy, Kate and Paula, and I sat together in the common room at the end of the day. The television was tuned to one of those science programs featuring ants from South America that could devour everything off a human skeleton in a matter of seconds. Of course the human skeletons remaining were living breathing people prior to the ant attack. It seemed an awful way to die and just being in the same room as the program was sure to make sleeping a bit more difficult. We did our best to ignore the grotesque programming and played our typical evening game of Spank Girl. It’s a rather simple variation of another popular word game that revolves around stick figures.
Amy picked the words, calling them a title as our one and only hint. Every time it was my turn I guessed a wrong letter and got a little more of the girl drawn. My thoughts really weren’t on the game. I could tell Kate was more or less feeling the same way. It’s like that on days you get punished for something. Come after dinner, you don’t want to hang out in the common room. The less you’re wearing the more you want to be somewhere else and Kate and I were stripped down to panties, socks and shoes. There wasn’t much more to lose. All I really wanted to do was crawl into my bed and forget about the awful day. I guess Kate felt the same.
Paula got annoyed with us when we lost. She’s avoided a spanking for a little bit so she’s starting to think of herself as being better than the rest of us. That happens. The next spanking is the cure, but sometimes a girl can go a while between spankings. Especially those of us that have been here a long time and more or less know how it all works. Still, the spankings always return, even when you think you’ve got yourself covered from every angle. All it takes is a Monitor, like Carol Sato, to throw a wrench (is that better called a paddle?) into things. And one spanking has a tendency to lead toward another and another.
Paula rolled her eyes and shook her head at the ceiling. “Did you two get your brains knocked out of your heads when you got spanked this morning?”
Kate scowled at Paula. The two of them didn’t always get along even in the best of times. “How about you strip down to your panties and we see how focused you are then?”
Paula smiled and fluttered her eyelashes at Kate. “It’s a consequence of not behaving, Kate. No wonder you’re constantly getting in trouble if you stop focusing on what you’re doing whenever you’re a little embarrassed by your situation.”
I touched Paula’s arm, distracting her attention away from Kate. “You know it’s not that simple. I’ve been over four years and I’m still not used to walking around half naked or worse.”
Kate leaned into the table. “And today was worse cause it wasn’t even fair. I mean she was late to class and then punishes us as if we were interrupting her teaching when she wasn’t even there.”
Paula laughed. “The rules are the rules. Just cause the teacher is not there to enforce them doesn’t mean you should stop following them and it certainly doesn’t mean you should get away with breaking them.”
I shook my head. “You wouldn’t feel that way if it was your butt.”
Paula smiled. “It’s not my butt because I know better and wouldn’t have done what you two did in the first place. As far as I’m concerned, you got off light.”
Fortunately, the evening bell rang, signalling time for bed. Further conversation was only going to lead to trouble and neither Kate nor I need more trouble. Paula and Amy, well sometimes I think they could use an extra spanking or two, just to remind them they aren’t quite perfect either. If I were a monitor I could do that, but I’m not. Then again, Abigail’s status as a monitor was definitely in jeopardy after her latest stunt. Maybe I’d get the opportunity again. I could always tell Ms. Chambers I’d like the chance. Definitely something better to think about in bed than those damn ants. 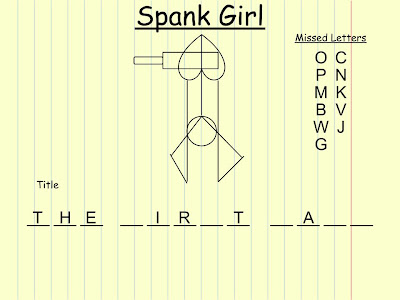 Ash,
as a child we played the hang man stick game.
We wouldn't have played your version, at the home that I was in the stick was all too often the cane.
The Head really enjoyed using it.
I'm enjoying this, in case you didn't know.
Love and warm hugs,
Paul.

Paul, It was a bit of fun creating this alternate version of the game, though I'm pretty sure I couldn't draw the shape as well by hand as a I did on the computer. Glad you're enjoying it.