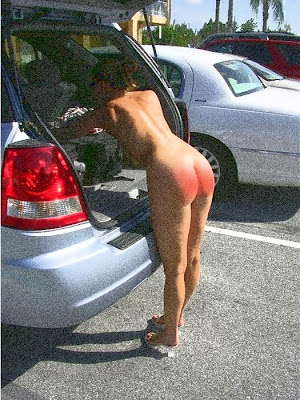 Bad behavior isn’t confined to the home. Sometimes, it occurs at times and places less than convenient for dealing with it, especially in the more traditional manner. In these cases Spankers, must decide whether or not the possible and probable attention drawn to a public spanking is merited. This is likely never a more frequent occurrence than on shopping trips.
When the Brat rears its ugly head in a store the Spanker must deal with it or risk losing control of the entire outing. The favored option is often the single hard hand swat to the Brat’s posterior followed by a promise of many more similar swats applied to the bare bottom upon returning home. However, sometimes the situation won’t wait and a more immediate and direct approach is necessary.
The Spanker must be vigilant in these circumstances and maintain an awareness of what will and will not be tolerated by the immediate public. In general it is a good idea to avoid spanking in front of large crowds. In the right circumstances though, the Spanker may find it possible to deliver a flurry of spanks over clothes, directly to undergarments or even occasionally to the bare bottom given a sufficiently private, public location.
Spankers may also choose to take advantage of dressing rooms, bathrooms and alcoves or hallways away from the prying eyes of the common shopper. The key to a successful spanking on a shopping trip is to keep it short and quick as well as to ensure the Brat is well aware that a much more serious punishment awaits them at home. Even without a large audience, the Brat will feel particularly embarrassed to have received a spanking in a store where so many strangers might possibly see or hear it happening.
An additional option, disliked almost universally by Brats is the parking lot spanking. The Spanker need only escort the Brat outside the store to the car and often times they will find it possible to deliver a more sound and complete spanking. In more accepting locales, the Spanker can bare the Brat’s bottom in the open air and apply a more lengthy spanking either by hand or by handy implement such as a belt. In less accepting situations, the Spanker can use the interior of the vehicle, a nice sized backseat comes in handy, for an over-the-lap spanking. With good tinted windows, the spanking can be applied as bare as the Spanker prefers and again, the Spanker’s hand or a handy implement serves nicely.
Also useful, and less comment inducing from spectators, the Spanker may employ the use of modified corner time while on a shopping trip. Having the Brat follow the spanker with their hands on their head can be a deeply embarrassing and humbling experience for the Brat. And while the act might raise eyebrows, the Spanker won’t have to be as concerned about activists interfering in their discipline and undermining their authority with the Brat.
Brats often think they are safe from discipline while on public excursions, but clearly the well prepared Disciplinarian can quickly change this misperception. All told, a publicly delivered spanking or other discipline can be a great benefit to the future behavior of a Brat. Once a Brat realizes they are not safe from discipline no matter their location, they will reconsider their actions and undoubtedly practice better behavior while out and about. Spankers must simply stick with their convictions and use good judgment to choose the best option to maintain order.
Posted by Ashley J

great take on the Correction of bad behavior while shopping and in public in general. the big enough backseat thought was a ideal one to put in.

The brat will be sorry after being home and dealt with again and more properly
Thanks for the article
AL :)

Great tips here. If there's anything more important than behaving at home, it's behaving out in public. A simple threat of a spanking at home just isn't enough without something immediate to back it up.

Al, I think it's safe to say that no matter how private a spanking in public is done, it is an experience the brat would rather avoid.

Ace, I would have to agree. Empty threats just don't work with most brats.

Paul, There, there. lol. I doubt any of us have not seen a brat or two in public who could have benefited from a quick bottom warming

Fortunately I have not been spanked out in public since the very first time my mom spanked me for smoking. Mom drove a volkswagen combi and she opened the side door and pulled down my swimming shorts and there proceeded to blister my bare bottom using her 24" long spanking ruler until I sported a black and blue bottom vowing never to smoke again.
Oh yes we were at a theme park and the car was parked in the parking area, a very busy car park

Growing up spanking was common and immediate. If we misbehaved we'd be spanked no matter whO was around. I remember many time being told to take my pants down and bend over the kitchen table or a chair while either family or my mother's friends were present. Most of the time I was spanked over underpants with a hairbrush and then sent to stand in a corner. Sometimes I had to take my underpants off also for the spanking and stand in a corner bare.

Projecting from raising small children, you have to make it clear you'll spank in public as well as private. Else the disciplinee will swiftly realize that the authority so respected in private is impotent in public. I dunno how well spanking my wife in the shopping mall would work, but with each of my children, I had to take the chance and go right ahead and make it clear that misbehavior would have consequences -- whether there was or wasn't an audience.

The problem instantly went away. Once they know you won't be deterred by an audience, they won't perceive an opportunity.