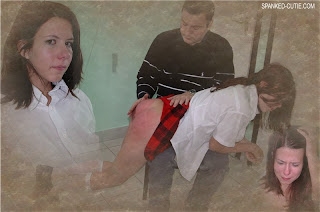 On the fourth floor of Foxum Hall, Michelle Embers stood naked in a shower stall. She stepped into the steamy spray cleansing herself of the soapy lather coating her skin. Her eyes drifted closed and she drowned herself in the moment, leaving behind the chaotic sounds of the morning rush. The tension washed away from her muscles and she inhaled the clean scent of a fresh day. She snapped her eyes open, turned off the shower and wrapped herself in the crisp starch of an over-sized towel. Michelle exited the showers thinking it was the beginning of another drab school day.

Ash, I'm back, a lot better and delighted to read this stunning story.
I also enjoyed the other two.
I disagree with Karl, I think that you are better than DJ Black.
Hope that you had a great holiday.
Warm hugs,
Paul.

Ash, Excellent story really liked how this one was written... thanks for the awesome story and great title too
AL

Another lovely story Ashley, with a well-modulated undercurrent of suspense. Welcome back!

I love this. I don't usually like stories in which a girl is being punished unfairly, but the blackmail twist at the end makes it entirely reasonable. And it's an excellent piece of writing. Enjoyed it a lot.

Paul, It's nice to see you back and feeling better. Glad you enjoyed the stories. It was fun to change into third person for this week's and I have to say, I was really pleased with the results. I will stay out of the arguments over who is the better author, although I greatly appreciate any and all sentiments in my favor. lol. Unfortunately my "holiday" was not much of a break and I am behind on a few things seeing as the break was unplanned. It will probably take a couple of weeks, but I am confident I'll have everything back on track soon.

Al, It was a bit different doing third person and took a while longer to write, but like you I think it came out good. Thanks.

Karl, I've been studying up on writing mysteries and this seemed like a great place to practice some of the techniques I've been learning. It sounds like they worked. I'm pleased you enjoyed it.

Abel, Nice to hear from you again. I sometimes find it hard not to put my spankees into unfair situations because it can be difficult to make them do "bad" things. In this case I think it worked to my advantage, but I'm working on techniques to make good people do believably "bad" things. At the very least it should be fun. I'm happy you enjoyed it.

Even if this was a vicious frame up it played out in a cute way. The idea of a girl opening up her drawers to find them empty is definitely amusing. I think it would have been even funnier if she didn't know exactly who to blame for it. The mention of blackmail at the end of the story easily turned Michelle from a victim to a girl who probably got less punishment than she deserved. I'd love to see a follow up story with these characters.

Ace, nice to hear from you again. It might surprise, but I actually do intend to continue this story with some additional sequences. I'm not sure how many just yet, but the setting and characters nicely lend themselves to some interesting scenarios which will be fun to explore.