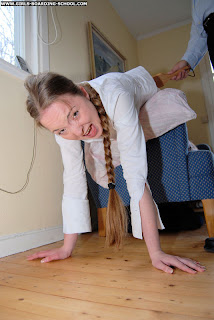 The loud clap of the oak paddle stamping Nora Trevane’s tenderly protruding flesh resonated off the walls and penetrated her body with a deep trembling. Hands pressed against the floor, she closed her eyes only to open them wider. She searched for an escape, all the while knowing it was both too late and too soon. Her face contorted, lips parted and air gushed from her open mouth. She howled in tune with the ripples of the paddle’s force singing through her body.
There was pain. It was lightning, flashing white and bright, coursing its way from her posterior to her glossy eyes. The sparks tingled her every nerve building up to a sharp pinnacle before fading to a dull throb. Thunder rolled in ragged waves of stinging disappointment. It emanated from the paddle’s scolding contact with her bubbled bottom. Her vision clouded with the gathering of tear droplets in advance of  the waterworks that would inevitably fall like rain from her glistening eyes. She weathered it all, embracing the inevitable nature of the storm.
Nora’s thoughts floated on the moment. She pictured herself, prim and proper. Someday she would be that woman. Sense would be common and wrong would never masquerade as right. Pride would come directly from her actions, not the way she faced their consequences. Her bottom would be attractively dressed instead of embarrassingly bare and exposed. She would hold her head high rather than bowing it low in disgrace. Compliments would be the source of the warm glow gracing her cheeks. She dreamed of that fanciful day while weltering in the red glow of her shame.
The paddle withdrew, leaving her buttocks devoid of its solid reassurance. In its wake, a gentle breeze teased her heat with coolness. She felt the nakedness of her thighs, her butt, her labia. Nora shuddered. The acuteness of her humiliating position renewed itself with fresh blood rushing to the surface of her pale skin. She cringed at the tingling.
Cold sweat and hot blood kept Nora quivering. She dreaded the rush of wind preceding the paddle’s touch. Its cool draft would be just enough to temper the blaze burning in her bottom. The moment of impact would bring with it a spark reigniting the flame. In the waiting her senses heightened her awareness of every sensation, unwittingly driving the fanned flames of her spanking higher. Her muscles tensed, anticipating the paddle’s return.
Regret fluttered with the butterflies tickling her stomach. It had been an error in judgment. There was no evil in her heart, no demonic plans formulated in her brain. It was nothing more or less than a foolish mistake. Anyone can make a mistake, she told herself. A foolish mistake was another matter and she knew it. Her lack of foresight combined with her selfish nature to lead her into disaster. They were the traits she struggled to control, to overcome. Having failed, she delivered herself to the consequences.
The paddle sang through the air, punctuated by the impacting crack of wood and flesh. Her bottom bounced inward. The ripples jolted through her body, filtering down into her hands and dissipating into the floor. The paddle lifted away once more, leaving Nora waiting for its return. She gazed into nothingness and saw her mischievous self mocking her.
In the terse silence she prayed for the spanking to continue. It seemed unfair from her bent perspective, but the swats delivered more than a searing discomfort. There was strength to be found. Next time she would be stronger, more resistant to the foolishness of her careless heart. Every swat made her more resolved. A brusque waft tickled her naked skin. She was trapped in the repetitious cycle. There would be an end, but not until she was strong enough to resist temptation and sorrowful enough to be forgiven. It was a spanking, after all.
Posted by Ashley J

Ash
Excellent story
Like the references you made with boating,Sailing terms and just plain not so good weather terms...like on the open sea in a rainstorm..also liked the description of the scene as she pictured it happening with her thoughts...this story had great imagination
Thanks for a awesome story
AL :)

Love the detail, Ashley. Such as:

"She dreaded the rush of wind preceding the paddle’s touch. Its cool draft would be just enough to temper the blaze burning in her bottom."

Describing the details of a spanking like that just hasn't been done nearly enough, I think. Makes me wonder how much personal research was needed to enable you to recreate this so vividly.

Ash, to echo Karl, this does seem remarkably personal.
Your descriptions are, for you, on the florid side..
Also, her reflections are rather mature, suggesting that she won't be in this position too frequently again.
You always write extremely well, it's good to see you trying out different styles.
Love and warm hugs,
Paul.

Al, As I wrote this story, it was burning hot outside and I found myself fantasizing about a nice cool thunderstorm which naturally led to an inclusion of the similar cleansing characteristics of a storm and a spanking. I'm sure it's been done before, but I tried to make it a little unique here in method.

Karl, I typically have written my stories focusing on character development through their actions. Recently, I have been studying on alternative manners of character development such as in this story where everything we learn about the central character is through her reactions and thoughts to the spanking in process. The results seem to be well received and I have to say I am satisfied as well.

As for personal experience, I think it would be safe to say I have had plenty which I can call upon to populate my stories with the real details that only experience can produce.

Paul, I think all my writing has elements there are personal, but I can see why this one would seem more so than many of the others. The third person writing style allows me to narrate the story without the disguise of a fictional character. I am always striving to improve my writing and exploring different styles like this is a lot of fun for me.

Ash, may I add a PS to your reply.
Perhaps even more fun for your loyal readers.
Love and warm hugs,
Paul.