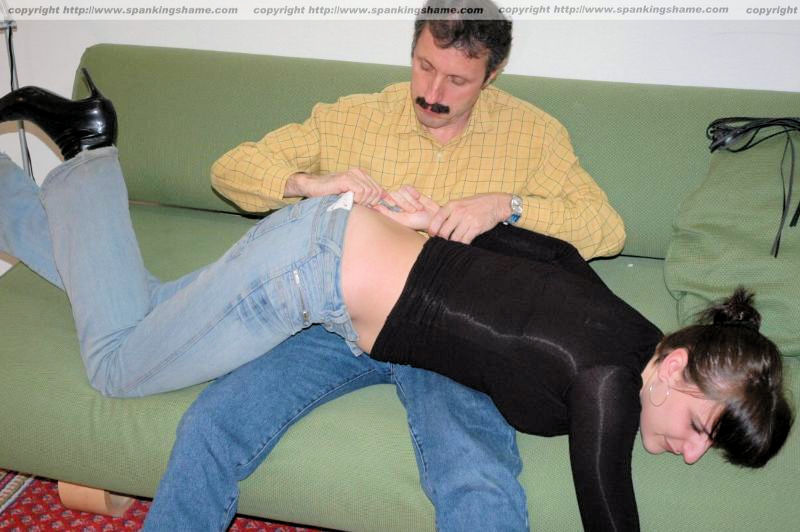 I almost made it. My fingers were wrapped around the brass knob leading to the outside world, to freedom. I had tiptoed down the stairs and across the tile entry floor. Every movement was carefully planned to avoid detection from my bedroom all the way to the front door. No one should have heard or even known, but there he was standing behind me.

"And just where do you think you are going?" He asked.
I suppressed a shudder, turning around to face him. Masking surprise with innocence, I said, "Out."

He raised an eyebrow. I tried not to laugh. He said, "Aren't you forgetting something?"
I looked to the ceiling, pretending to ponder the question. My eyes floated from the left to the right and back to the left again. He stood there, tapping his foot. I said, "No, nothing I can think of."

"With all that makeup, I wasn't sure," He said.

"Who's the comedian?" I asked.
"The only thing funny here is you thinking you could walk out the front door without me noticing," He said.

"Maybe I didn't care if you did," I said, resting my hands on my hips.
"That's why you were tiptoeing," He said.

"Whatever," I said. "I'm going out."
"No, you're not," He said, stepping a little closer. "In case you've forgotten, you're grounded."
I said, "In case you've forgotten, I'm an adult now. I can do what I want."
"You may be old enough to drive, vote and drink, but so long as you need to verbally affirm your status as an adult for others to realize it, you are not an adult," He said and pointed up the stairs behind him. "Now you can go back up to your room and think about why your behavior continues to disprove the theory that you're an adult."

I said, "You can't make me."
He shook his head at me and said, "That's your argument; I can't make you? You're absolutely right, I can't make you do anything. So go ahead, walk out the door and pretend you've done nothing wrong. I am the ogre after all. How dare I expect you to suffer any consequences for your actions? Is that how you think?"
"I didn't say that," I said, looking at the floor because I could no longer look him in the eyes. "I just want to go out."
"And I'd like to be a billionaire," He said. "Unfortunately, to get the things we want in life requires hard work and sacrifice. Sure, there are shortcuts. You could walk out the door, I could rob a bank, but there are consequences for those kind of choices and while you might like the short term satisfaction, I promise you, the long term results aren't worth it."
"Nobody is going to throw me in prison for walking out the door," I said.

"Hopefully not, " He said, "but you will have disappointed me. I've raised you to have better character than this, to have better respect for yourself and for me. If you walk out that door, I'll know I failed to teach you the most important lessons about life."

I looked at the door and closed my eyes. "Fine," I said, turning back to him and throwing my hands up in the air, "if it's such a big deal to you, I'll stay home."

"I give up, " He said, turning and walking away, "Do what you want. I'm sick of your attitude."

"Bastard," I said under my breath, watching him walk.

He spun back around and said, "What did you say?"

"Nothing," I said.
"I don't think so," He said, walking back to me.
"Like you even care," I said and started back up the stairs.
He grabbed my arm stopping me in my tracks. "I've got half a mind to put you over my knee," He said.
"You wouldn't dare," I said, glaring back at him and trying to pull free from his grip.
"A good spanking is just what a brat like you needs," He said, pulling me back down the stairs and dragging me toward the living room.

Tugging against him in a futile effort to escape, I said, "I'll scream."

He chuckled and said, "Go ahead, I expect you'll do a bit more than scream before I'm done."

"I can," He said, sitting on the couch and pulling me down onto his lap, "and I will."
My face buried in a cushion, I kicked and squirmed as his hand began bouncing off my jeans. It did not really hurt and if I had not been outraged, I might have laughed. The slap of his open palm against my denim protected bottom gave truth to the old adage of it hurting him more than me. Still, I protested saying, "Stop it," over and over.

"I'll stop when you've got what you deserve and not a moment earlier," He said, pausing the spanking and resting his hand on my jeans, "Now I think its time we had these down."

A tug on the waist of my jeans shot my eyes wide open as his intentions were made crystal clear. I twisted on his lap, reaching back and grabbing at my jeans in a desperate attempt to foil his evil plans. He laughed at me and pushed my hand away toward the small of my back. In frustration, I kicked my legs while I stared at the cushion, shocked he could be so cruel. His efforts were slowed by mine, but in the end my jeans were tugged below my bottom, exposing my adult underwear to his view and consequently, the bare globes of my bottom.
"That's better," He said, his free hand resuming the spanking with more enthusiasm than before. This time, every slap left a sting I could feel all the way to my eyes. I kicked and squirmed, pounded the cushion with my fist, but it was all in vain. Better, is not how I would describe the situation at all.

"I promise," I said and he replied, "You'll actually mean it before I'm through."

My eyes filled with teardrops. His hand whisked through the air. The walls echoed with the sounds of my spanking. My bottom burned with the heat of shame. Tears rolled down my cheeks and in their glistening drops I saw myself. Such a bad girl, such a naughty girl, getting exactly what she deserves.
Posted by Ashley J

another fantastic Friday Pictale. she sure had an attitude but in the end she got it adjusted and exactly what she had coming and deserved. great picture and very well told story.

Ash great story, being a legal adult and being mature are two very different thing, as most of us learn at some stage in our lives.
As dad pointed out to her in no short order, such a smart mouth she had on her, I'll bet she had a few extra licks for that.
Word Verification, flayisms, a little severe, but suits the story.
Warm hugs,
Paul

Al, I think a little attitude goes along way to making a story fun. lol

Paul, I think it's a fact of life that we tend to view ourselves as mature beings long before we actually are those mature beings.