The Girl In The Window 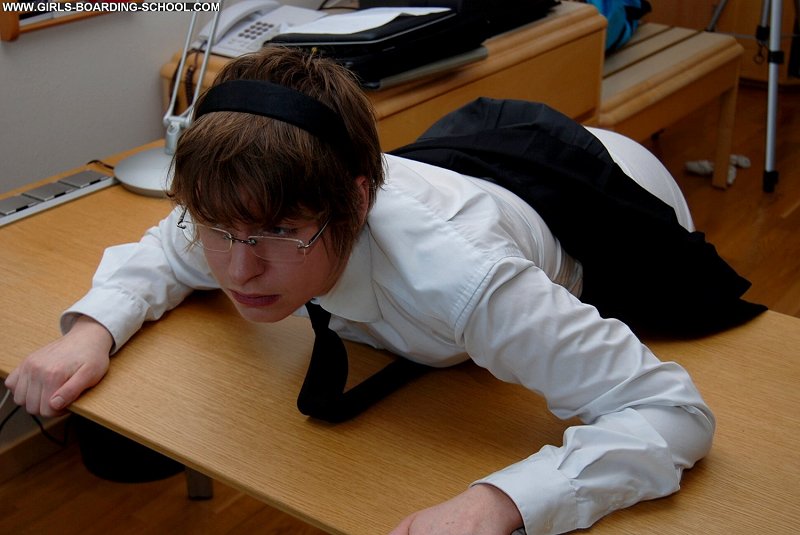 "Out," Ms. Garrett said, pointing at the door and staring at me.

A hushed silence fell over the classroom. Feeling the eyes of my classmates boring into me, I closed my textbook and slipped it off the desk, into my waiting book bag. My knees wobbled under the weight of my peer's scrutiny as I rose from my front row desk. I walked with a nervous, anticipatory stomach toward the door. Ms. Garrett's gaze remained stern and her finger continued to point the way, while everyone else sat watching and wondering.

I stepped out into the empty hallway and listened to solid clunk of the closing door. Anxiously, I walked the vacant corridor toward the office at the end. It felt like freedom, walking alone in the hallways normally crowded with students scrambling to their respective classes. I had never walked them during classes before, never listened to the echo of my heels against the locker lined walls.

My hand rested on the cold brass of the door handle leading into the administrative office. I took a deep breath and steeled myself against the fear building like a lump in my throat. It was too late for second thoughts. I pulled the door open and walked inside, keeping my eyes downcast as I approached the assistant's desk. She clunked her phone down into its cradle and turned her attention to me. I caught a flash of shock on her face before her usual emotionless facade restored itself.
I swallowed my lump and said, "Ms. Garrett sent me."
She looked me up and down before saying, "I'll let him know. Stand over there and face the wall."
I followed her finger to the wall across the office and bit at my lip. It was no surprise I would have to wait, but I had not expected to do so in such an embarrassing fashion. I swallowed again and walked as slowly as I could to the wall. In my imagination, hordes of my classmates came through the office at the very moment I reached the wall. They pointed and snickered while murmuring about the deeds I had undoubtedly done. None of them felt even the slightest twinge of sympathy for me. I deserved my fate, had escaped for far too long and now, finally, justice was upon me. Fortunately, my imagination is far more fertile than reality.
The wait seemed eternally long. I stared at the texture on the wall finding dragons, dogs, giraffes, elephants, and lions until it all blurred into white nothingness. The office staff continue about their business as if I were not in the room. They whispered amongst each other and although it was tempting to think their quiet words were about me, it was obvious they were not. Nobody cared, nobody except me.

"Mr. Pinkert will see you now," The assistant said, loud enough I knew she was talking to me.
I hesitated a moment, gathering my wits once more. Butterflies swirled in my stomach like dogfighting jets. My knees went weak, but I found the courage to put one foot in front of the other and made my way across the office to his closed door. The assistant nodded for me to knock and I raised my trembling hand to comply. The wood felt hard against my knuckles and the knock echoed like a sonic boom in my ears.
"Come in," Mr. Pinkert said from behind the door.
I stepped inside just enough to allow the door to close behind me. Mr. Pinkert sat behind his desk, his hands folded together and resting on the desktop. Underneath his hands, a small pink note awaited his attention. No doubt it was from Ms. Garrett about me. Admittedly, I was curious as to what she had written, but not enough to ask him. I felt tiny standing before him. The stern frown on his face set my heart to a pounding pace.
"Over here, girl," He said, pointing to a spot directly in front of his desk.
My legs carried me forward without my conscious cooperation. His voice boomed in my ears, leaving me lightheaded and scared. It had all seemed like a good idea in the beginning, but now, it was feeling like a mistake. I bit my tongue to avoid rambling nonsensical explanations. My eyes rose to the open window behind him. The empty courtyard outside taunted me, trapped as I was behind closed doors.
"If I'm not mistaken, this is your first trip to my office," He said.
"Yes," I replied, shifting my gaze down to his desktop.
"I aim to make it your last. If you had any illusions I might go easy on you, put them out of your head now," He said, pushing off his desk and standing up.
I chewed on my lip, uncertain if I was expected to respond or remain quiet. He opened a desk drawer and pulled out a small leather strap. The drawer slammed closed, making me jump at the unexpected sound. He smiled as if my nervous response pleased him. I watched him as he walked around his desk, coming to stand behind me where I could no longer see him.
"Do you have anything to say for yourself before I spank your naughty bottom?" He asked.
I swallowed and said, "Just that I'm sorry. I know it won't make any difference, but I want you to know I'm sorry and I know I deserve this."
He said, "Well then, why don't we get this over with. Bend over the desk, grab the far edge and stay down, unless you want extras."
I sucked in air puffing out my chest and closing my eyes. The moment at hand, I was no longer certain this had been a good idea at all. Still, the choice had long been made and the time to turn back was long gone. I leaned forward, carefully supporting my weight on his desk until my upper body was laying flat against it, my hands grasping the far, unseen edge. My leg jumped at the faint brush of his against my tender thigh and my eyes shot open in barely contained panic. He chuckled, amused at my reaction to his touch and without further warning his fingers swept underneath the hem of my skirt and flipped it up on my back. I swallowed fear by the gallon, unable to think of anything more pertinent than the gaze of his eyes upon my exposed bottom.
My reflection stared back at me from the window behind his desk. I could see him as well, arm raised high above me with a limp leather strap hanging from his hand. The ticking of the clock on his wall pounded like a drum in my ears. My skin prickled from light breeze of air conditioning over my body. I focused on the girl in the window, the fear and the commitment in her eyes. There was strength to be found and I grasped it, holding tight to the edge and waiting for the fall of the strap, the pain it would bring.

The dull clap of the leather against my protruding bottom belied the true force of the swat. I blinked as the sting twitched my buttocks and legs. In the glass his lips curled at the edges in the kind of smile men have when they are more satisfied than happy. My body returned to stillness. The sting of the first stroke passed from pain to warmth.
He laid on another stroke, striking perfectly below the first. I gasped in response to the new sensation of sting. My legs shuddered once more for his enjoyment and my bottom bounced. Holding me head up, I stared at the girl in the glass. I admired her composure, her strength, her acceptance. All the doubts I had harbored for so long slipped away. The choice was right and the consequences just. I refrained from smiling lest he realize the game being played and change the rules. Ms. Garret was right, sometimes even a good girl needs a spanking.
Posted by Ashley J

Ash,
Another great tale.Awesome title,
good girl spankings can work,they can help the girl think before she is bad to deserve a discipline one, guess they kinda serve as a reminder one.great fun story here.
thanks
AL :)

Ash, that is almost a Mantra among us, and I believe it to be true.
You express her fortitude and desire beautifully, thank you.
Warm hugs,
Paul.

Al, Good girl spankings have many purposes and not all of them have anything to do with her behavior, good or bad. lol.

Paul, Spanking is such a complicated desire. It can be a reward or a punishment or even both at the same time. I'm definitely having fun exploring all the possibilities.