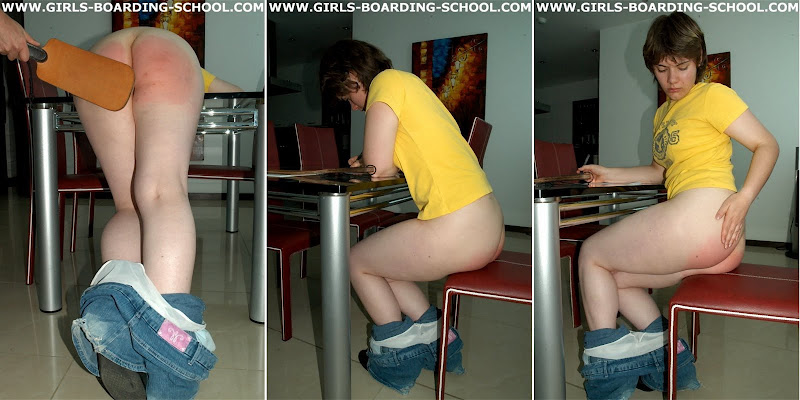 "Get 'em down," He said, closing the front door behind him.

From the couch, I blinked at him. "But—

"Now," He said, opening the closet door.
I stumbled to my feet, mind racing. It had been a quiet day, not the usual sort to land me in a spot of trouble. My fingers felt cold and numb as they fumbled with the button and zipper holding my bluejeans in place. The noise of the television turned from entertainment to distraction. I watched him pick through the closet, remove the wide strap and close the door.
He turned to me, his eyes scanning me from head to toe, pausing in emphasis at my waist before leading down to my ankles. I hesitated with my thumbs hooked into the waistband on my sides. The warm glow of embarrassment graced my cheeks under his daunting gaze. I swallowed pride and forced the nervous muscles in my arms to comply, raking my jeans and panties down my legs until they rested around my ankles. Straightening back up, I found a spot on the floor between us and stared. I forced my twitching hands to rest at my sides, exposing me to his gaze.
"Over to the table," He said.

I bit at my lower lip. The table loomed ominously across the room, almost as if it were laughing at me. I shuffled toward it, my feet shackled by jeans and underwear. My eyes flickered to him, looking for some clue as to the reason for my shameful walk. He kept it hidden, his stern face a mask only softened by the slight amusement gleamed from my shuffled walk. I might have smiled.
When I reached the table, he said, "Over."
I looked back at him, pleading for an explanation with big eyes and fluttering lashes. He pointed at the far side of the table. I turned back to the table, sucking in air and courage. My lips trembled with the questions plaguing my mind. I kept quiet, not a whimper escaping and bent at the waist, reaching for the table's furthest edge. My fingers wrapped around the cold smoothness of the glass top and I waited.
He stepped closer, draping the wide strip of leather on my naked bottom. My legs twitched at the touch. I closed my eyes, bracing for the inevitable conclusion. He raised the strap only to bring it back again with same teasing gentleness with which he began. I knew it would not last. If only I knew why, it would be so much easier to accept.
A jerk of his arm and flick of his wrist ended all the pleasantries. The strap snapped against my quivering bottom, sending waves of force rolling through my body. I gasped at the suddenness. My eyes flickered open and shut, weathering the beginning sting and the tingle of warmth emanating from my bottom. He pulled the strap away to linger in the unseen space behind me.

"I'm disappointed," He said, lashing the strap down on my bottom as if in demonstration of his feelings.

"I'm sorry," I said, blinking back tears caused by the sting of his actions.
"Are you now?" He asked, connecting the strap with my bottom like the physical representation of the question mark in his tone.
"Yes," I said, wriggling my burning bottom. The cause of my sorrow remained a mystery, but there was no doubt about its existence.

"What were you thinking?" He asked, the strap whipping the question into my very soul.
"I don't know," I said amidst tears of global remorse.

"You don't even know what I'm talking about, do you?" He said, punctuating every syllable with a snap of the strap against my naked bottom.

I held tight to the table. Tears spilled from my cheeks onto the glass. My legs kicked. My bottom squirmed. There was no escape from the strap or its effects. The burning built atop itself with no respite and the sting, coursed its way through my body, leaving my every extremity tingling. I cried out with every lash.

"You're lucky, Mr. Wicker is a friend," He said, swinging the strap twice more.

The connections sparked together. I had been caught. I should have known from the start. Mr. Wicker was my boss. He owned a small bookshop on the corner of Main Street. It was not the most popular place in town, but he keeps a unique collection of rare editions which sell quite well amongst collectors of such things. They often arrive from far off places with bundles of cash, willing to pay much more for the books of their desire than Mr. Wicker asks. It was wrong, I suppose, to have tricked the young man today. He knew no better, so it seemed the extra hundred dollars would be better valued in my hands than his.
"Remembering now, are we?" He said, the strap eliciting every detail of the memory.
"I'm sorry," I said, with renewed conviction.

"I bet you are, now," He said. "Anyone else might have just called the police."
"I'll give it back," I said, wiping tears from my eyes on my arm.
He lashed the strap down on my bottom and said, "You certainly will."
"It was stupid," I said and he swung the strap, hard.
"Yes, very much so and you'll pay for the stupidity," He said.
"Yes, sir," I replied, knowing my agreement mattered little in the scheme of things to come.
"I'm going to give you ten more now and when I'm done, you are going to sit down, on your bare, sore backside, and you are going to write a very lengthy and apologetic letter to Mr. Wicker and then another to young man you swindled. Understood?"
"Yes, sir,"I said.
"And when you're all done and I'm satisfied you've done a good job we're going to go see Mr. Wicker and this young man and you are going to return the money you stole, apologize to them both and personally deliver these letters. Afterward, if they are at all inclined, you will tell them exactly how you've been punished and show them your big, red backside. Is that understood?"
"Yes, sir," I said, blushing at the mere prospect.
He whipped the strap through the air allowing it to crash against my already tenderized bottom, ten more times. I pushed myself up from the table, gratified it was over even though it was not. Carefully sitting down at the table, I picked up the pen and brought it down against the blank paper he gave me. His eyes held no compassion for me. I blinked back tears and began to write, but the only thought on my mind was the burning in my bottom and the shame of what I had done.
Posted by Ashley J

Excellent Story,like the communication between him and her. seems she could of got in a lot more trouble if Mr Wicker was not a friend, nice name by the way.Seems she has learned a lesson might of been the hard way but it looks like she is sorry for what she has done

like the three different images goes good with the different parts of the story as it progresses. really liked that
AL :)

What is the nature of these special books, that collectors are will to pay so much for?

Will Mr Wicker add heat to the girls bottom?

Will the defrauded young man join him, or blush and look away?

I think that you give a little sadistic chuckle, when you post these stories.

Al, She could clearly have been in a lot more trouble, but also, her troubles were not quite over either. The photo collection was just trying something new, a lot of the pic sets have multiple images that I could use and sometimes it seems a shame not use them.

Paul, That's exactly what I love about short stories. They give you this little snippet, usually in the middle of something which could be a larger story. I think it's fun to leave the open ends for a reader to insert their own imaginings and therefore claim a little ownership of the fantasy created. I promise no sadistic chuckling on my end, well almost none, I mean I don't really believe in the devil. lol