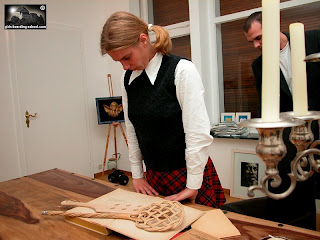 Decisions, decisions. For the spanker the quandary can often be simplified by the offense committed, the number of times said offense has been committed and the attitude of the spankee in waiting. However, this is not the decision being discussed here. Today, the topic, and the choice, is when the spanker decrees it time for the spankee to make the fateful choice as to which implement will soon be impacting their very own buttocks. And should it seem a simple choice, then the choice has not been properly orchestrated.
The first step in crafting a truly difficult decision is limiting the options. Speaking purely in terms of a disciplinary situation, the spankee will opt for a wet noodle if the option is left on the table. For best results the spanker should select between two and three implements which the spankee will then have the pleasure of selecting one. If possible, the spanker should also avoid leaving a spankee’s preferred implement in the mix unless its selection can be discouraged in some manner that makes it less preferred than normal.
The second step is to ensure that the selection only makes a difference in the mind of the spankee and not in the effectiveness of the discipline. This is to say, not all implements are created equal and political correctness aside, they should not be treated equally. For example; Given an option between 10 swats from a small leather paddle or 10 swats from an oak sorority-sized paddle, the leather paddle would win out 9.99999999 times out of 10.  However, the decision can be complicated if the number of swats from the leather paddle are increased by triple and an additional stipulation of the leather paddle being applied to bare buttocks whereas the wooden paddle would be applied over clothing. On the other hand, a hole-drilled, blister-inducing wooden paddle versus a thick, welt-raising cane offers a relatively even choice. Either way, the spankee isn’t going to be sitting comfortably without an over-stuffed pillow.
The third step is to limit the time in which the spankee has to make the decision. A minute or two is sufficient in most cases although it can be an interesting dilemma to leave a spankee considering while serving a little pre-spanking corner time as well. The more time a spankee has to consider the options can be a good thing in terms of increased anxiety, but without a hard limit with consequences (like getting spanked from all) the spankee can effectively put off the decisions, in effect lowering their anxiety, until the spanker takes back control of the situation.
The fourth step is to keep the spankee guessing about the spanker’s intentions. It may comes as a surprise to some spanker’s, but if the spankee can be certain their choice will result in a lesser punishment, they will choose it. But, if the spanker never makes it clear whether the spankee’s choice will result in a spanking from the chosen implement or a spanking for the un-chosen implement(s), the spankee will further complicate their choice by considering the possible results. It’s best if the spanker avoids any detectable patterns in how they proceed following the spankee’s choice, but at the very least they should attempt to establish a pattern that goes beyond a mere three or four occurrences.
Giving the spankee a choice in implements is good way to engage them in the disciplinary process. When the choice is arranged properly, it becomes less about how little discomfort they can escape with and more about what they deserve. This type of thinking will erode much of the resistance a spankee might display and helps them to mentally assign the blame for the discomfort of the spanking on their own shoulders, where it belongs. Involving the spankee in the implement decision process is an especially valuable tool for spankees lacking acceptance for their discipline despite needs to the contrary. It should be noted that such individuals may initially need additional motivations (extra swats, harsher implement, longer corner time, less protection in the way of clothing, writing lines, exercises, chores, etc.) to push forward and make a decision.
Posted by Ashley J

Yet another fine and well-written essay, this time on the difficult decision a spanko sometimes has to take. Canes, while having a fierce reputation, aren't the easiest things to use, for instance; too hard and the spankee is turned off them, probably for ever; too soft and they are not taken seriously.

It is indeed a very fine line and it's marvellous you should be addressing it for us as a a little diversion from your stories.

Ash, I think the spanker that does this has an extra touch of evil.
Standing in the corner trying to decide between her three least favourite implements, and having to do so in less than five minutes!
Also knowing that whatever her choice. she will be sitting sensitive for quite some time. cruel. :D
Love and warm hugs,
Paul.

Very Good Article.
Making the spankee choose the implement seems fair in one way cause it lets them participate in the process and not leaving the feeling left out..but also can be unfair in other ways.
AL :)

When I spank a naughty woman, she has two corporal punishment implements to choose frp,. A birchrod, or a cane. Both implements are a delight to use on her knickerless bare bottom. Both swish painfully her naked rear end. Of cours she knows, she will receive at least 'six of the best'.

Paul, I have to agree. It's quite a challenge to make such a decision and it often seems as if any choice is a bad one. Of course when a favored implement enters the selection, it's a much easier and more welcome choice.

Al, I have often heard, though I'm undecided personally, that life is not "fair". Perhaps choosing implements is just part of life, for the spanking inclined at least.

Sixofthebest, That doesn't seem like much of a choice, although with only a half dozen, I think I could handle either.