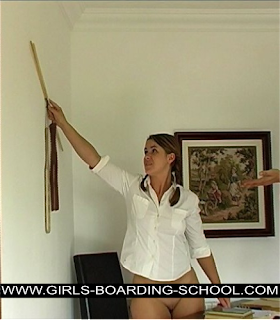 It may hang on a nail or a hook. Perhaps it is displayed in prominence like decor on a wall or a knickknack resting on a shelf. Or maybe it hides behind a closet door, inside a cupboard, or lays innocuously inside a drawer. Wherever it is, it is not in the hand of the one of who will use it nor the hand of the one who will receive it. It must, therefore, be fetched by one or the other. We are of course speaking about the dreaded implement.
The fetching of the implement is a time-honored tradition in many households. While the location of the implement and the implement itself may vary greatly, the miscreant in these homes is always well aware of its existence and locale. And they know without doubt when the time comes, they will be sent without hesitation to bring it forth. From their own hands it will be offered to the one who will use it. It is an act of ceremony, respect, and obedience.
A spanker may have many reasons for having their subject retrieve the implement for their spanking, but few would argue that above all, the act sets the tone of what is to follow. The spankee who fetches their own implement may do so under protest and yet in the end they have cooperated and when the implement leaves their hands for the hands of the spanker, the spankee has in effect given their consent. This act’s importance cannot be overstated because it establishes an acceptance of the forthcoming spanking, perhaps reluctant acceptance, but acceptance nonetheless. It is therefore understood between spanker and spankee that once the implement has been fetched, a spanking will ensue and the time for arguing and resisting has passed. In essence, the fetching of the implement sets an atmosphere of calm, controlled, and planned discipline.
The procedure itself may have a near infinite number of variations. Some of the popular possibilities include;
Often, though not always, the fetching of the implement is reserved for a singular implement in the spanker’s repertoire. In these cases it is typically one of the more fearsome choices such as a large wooden paddle or a thick cane, but it can truly be anything from an ordinary cooking spoon to an elegant hairbrush and beyond. Whatever the choice, the spanker can rest assured their spankee will view the implement they are sent to fetch as noteworthy. Perhaps it is because of the tactile connection established by holding and carrying it or maybe it is due to the extended contemplation of the impending spanking while traversing the distance to and from the implement’s home. Though it may not be the most severe implement choice available, if it is the only one they are ever sent to fetch it will take a special place in the thoughts of the spankee as a thing to be avoided.
In general, sending the spankee to fetch the implement of their spanking heightens anticipation and enhances acceptance. Those spankees who are given to fits of resistance will benefit the most from this ritual while none will suffer adversely from the added benefit of longer contemplation prior to the first spank. For spanker’s, the extra time is useful to collect thoughts, calm any agitation, and focus on the specific goals of the coming discipline they are about to impart on their spankee.
Posted by Ashley J

A beautifully-worded and accurate description of what, to many, is an integral part of the spanking, helping focus the recipient's mind on what is to come.

You are such an eloquent writer, Ashley, and, I am quite sure, a devoted aficianado of all things spanking.

Thank you for sharing your thoughts with us in this fine little piece - and red bottoms for ever!

Ash,
a very well written treatise on the practicalities of having to fetch a punishment implement.
I imagine this is something that is common in the disciplined home.
Thank you, an interesting piece.
Love and warm hugs,
Paul.

Yes, fetching a spanking implement off the wall, such as a pliable stinging cane, or a whippy birchrod, to bring to your master, is one more humiliating experience for a naughty woman to go through who is about to be corporally punished, on her bare bottom.

Hedgehog, Thanks. I'm pleased these little articles are so thoroughly enjoyed.

Paul, I do think this is one of the more popular "rituals" of in home discipline, though I would also wager the popularity is a bit one-sided. lol

Sixofthebest, Having fetched an implement or two myself, I can assure you it is at the very least a humbling act. The embarrassment factor, in my opinion, is directly proportional to the number of people in the house at the time of fetching.