***The following story is based in part on actual events, fictionalized and embellished for your entertainment. The names have been changed to protect the guilty, the innocent, and the author.*** 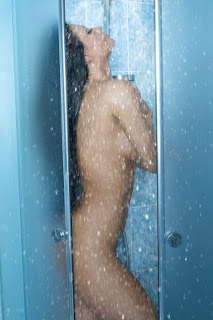 Excellent first part of the story looking forward to the continuation of the story.
April sure does seem to have an attitude and so far I have to agree with the way her Dad is handling things.
A red backside seems to help with Making adjustments to attitude problems.
(glad the stories are back but still wont mind any articles you have coming in the near future)
Thanks for the story
AL :)

Thank you for this titillating glimpse behind the shower curtain, Ashley. Eagerly awaiting Part 02.

Ash, great to have a new story from you.
Looking forward to part two.
So far it's up to your usual standard, but never judge a cake 'til it's baked, so I won't really comment until I've eaten, er, read the rest.
Love and warm hugs,
Paul.

Definitely a great set up. I'm really looking forward to the continuation.

As others have said this brilliant first part leaves your readers eager to read more. I am pleased to see your trademark themes appearing in this piece: a proud, witty, independent young woman, who will nonetheless submit to authority; deep embarrassment, but not degradation; and a clever use of secondary characters as witnesses to add to the offender’s embarrassment. Smirking younger brothers are the parents’ best auxiliaries when it comes to disciplining a cheeky daughter.

This is my first read of your work, ashley, and i love it.

Looking forward to more, and I hope to see a description of your nubile bod and all your feelings about what is happening to you :)!

Al, I promise a mix of articles and stories in the near term future, but don't worry, I'll post part 2 of April's story for this coming Monday.

Michael, Nice to hear from you again and pleased you enjoyed it so far.

Paul, I'm not sure if this is a two-layer or three-layer at the moment, but I promise a week will be the only frosting between the layers. lol. I completely understand your waiting because I would likely do the same. I mean just cause the first layer looks good doesn't mean a thing. What if I combined chocolate cake with fruit cake in the next layer? It might improve the fruit cake, but I don't think the chocolate cake would be improved.

Ace, Nice to hear from you. Part two will be up this coming Monday and probably available from there after. I'm not planning on taking it down at least.

François, To me stories are quite bland when the author neglects those secondary characters. Part of the psyche of the spankee is the fear of "did somebody hear" or "did somebody see" and if we're going to bring any sense of reality into a story, (not that all stories need or want a dose of reality) it should be realized that in some situations (like in a family's home) the answer is almost certainly yes. Top that with the undeniable reality that in a disciplinary home, siblings tend to be both relieved and amused when its not their own bottom getting spanked. Anyway, that's my reasoning for keeping those wonderful extras on the fringe of a story at the very least.

Anonymous, Welcome to the blog. I'm glad you enjoyed your first read and hope you'll come back for part two on Monday. If your looking for other stories to read, I have lots of them you can find in the archives.