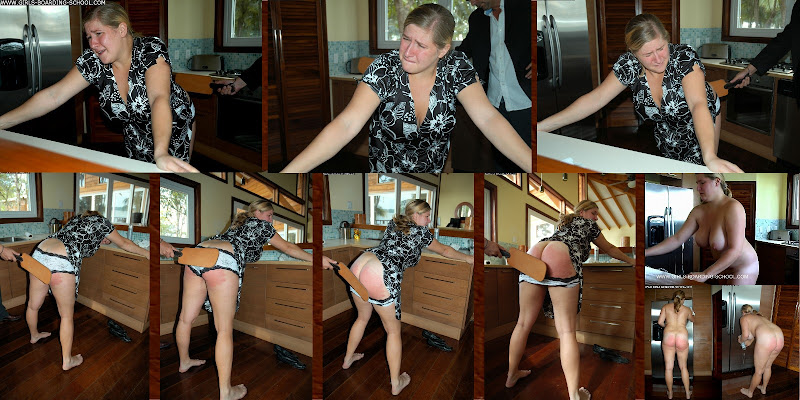 Everything was perfect. Not even a molecule could be found out of place in the entire house. I filled my glass with water only to have him fussing over me, polishing off water droplets on the faucet before they could become hard water stains. It was irritating and he did not care.

“Dad,” I said, taking his attention away from the polishing work, “nobody expects an antiseptic house.”

“Nobody is going to pay three quarters of a million dollars for a home that includes the disaster zone you typically call a bedroom either,” Dad said.

“It’s not like I didn’t clean it up,” I said, grabbing a yogurt out of the fridge and peeling off the foil top. “Besides, if the house doesn’t look lived in, nobody will think of it as a home.”

“No amount of cleaning can change the fact this place looks lived in,” Dad said, returning to his polishing. “The difference is whether people think slobs live here or normal people.”

“Normal people have water droplets on their faucets,” I said.

“They also sit at a table when they eat,” He said.

“If you make a mess, you’ll find out just how talented I am,” Dad said, pausing long enough to stare his meaning into me.

My eyes took an involuntary turn toward the ceiling. I shook my head and dropped the yogurt container on the counter. Shoving it aside, the spoon almost toppled it over. I watched it, almost disappointed it did not fall on its side. Dad glared at me, scolding words clearly on the tip of his tongue, but I had no desire to continue the banter. I turned my back and started to walk away.

“If you’re done with it,” Dad said, stopping me in my tracks, “throw it away and put the spoon in the dishwasher.”

“You wouldn’t know how,” I said beneath my breath and turned around.

“What was that?” Dad asked.

Dad straighten up his stance, one hand grasping the edge of the kitchen counter like a vise. He tossed the towel in his other hand aside and scowled at me. I smiled and blinked my innocent eyes, hoping he would just let the little slip go. There was clearly a debate raging behind his beady eyes.

He said, “You’re lucky they’ll be here in less than ten minutes.”

“If you say so,” I said, with another shrug.

“Don’t push me,” Dad said, wagging a finger like I was a naughty dog.

I grabbed the yogurt off the counter and said, “Don’t have a coronary. I’m taking care of it.”

Dad said, “I don’t know what is with your attitude today, but as soon as they leave you can plan on spending some time in the corner thinking about it.”

“My attitude?” I said, fuming and waving my hands in the air, “Give me a break. Like someone is really going to take a hundred thousand off the asking price because I ate a fucking yogurt.”

“You’re making a mess,” Dad said, as a drop of yogurt fell from the container to the counter top.

I spun around intending to stomp out of the kitchen. The yogurt slipped from my hand and went flying through the air, splattering against the front door of the refrigerator. My breath caught in my throat. The mostly empty container and spoon clattered to the floor. Slowly, the white ooze slid down the door. I heard the click of the wall clock in the living room.

“Now,” Dad said, and he pushed past me leaving the kitchen.

I knelt to the ground and picked up the container and the spoon. The container went into the trash and the spoon into the dishwasher. Under the sink I found the polish for the stainless steel finish of the refrigerator door and a clean cloth waiting to be used. Following the instructions on the can, I shook it. I glanced at my watch, noting the prospective buyers were due to arrive at any minute. Dad would never forgive me if it was not cleaned up before they arrived.

“Put that stuff down and bend over the counter,” Dad said, returning to the kitchen.

Glancing behind me, my eyes fell to the large leather paddle in his hands. Pleadingly, I said, “I’ll clean it up.”

Dad nodded and said, “I know, but first you are going to start doing what you’re told, when you’re told. Now put that stuff down and bend over.”

Reluctantly, I turned back to the counter and complied with Dad’s wishes. I kicked off my shoes and pushed then against the cabinets and then took two steps back. Leaning down, I grabbed the front edge of the counter and chewed on my lower lip, waiting for the first blow of the paddle. Dad took up position behind me and cleared his throat, making me jump.

“Lift up your dress,” He said and I did.

My hands barely grasped the counter again before the first thud of the paddle, smacked against my bottom. Tears welled in my eyes. Dad swung again. My body lurched forward under the second impact and breath exploded out of my lungs. The edge of the counter dug into my palms. The leather slapped into my bottom for a third time and I yelped, lifting my left foot off the ground.

I planted my feet back on the ground and held tight to the counter. Contorting myself, I looked back just in time to watch the tan leather blur through the air and brand itself against my bottom once more. Before I could turn away, Dad raised the paddle in the air again and began to swing it back down. Tears dripped from my eyes onto the counter. My bottom burned with the guilt and shame of my reckless action. It no longer seemed to matter that it was an accident.

“Take your panties down,” Dad said.

I reached back. My thumbs hooked into the waist band. I told myself to comply. My arms refused the command. I stood frozen, knowing noncompliance was a mistake and equally knowing compliance would only bring about more pain. My eyes fluttered closed. I imagined myself lowering my panties, exposing my bottom. Reality refused to reflect it.

“Now,” Dad said, his impatience vibrating in the tense air between us.

My arms jerked downward in response. I felt the cool rush of air across my bottom. My hands slipped away from the flimsy garment, reaching once more for the counter edge. The leather struck hard against my bare, burning bottom. I twisted and yelped. Dad pushed a hand into the middle of my back forcing me downward and I grabbed the counter’s edge to steady myself. All I wanted was to grab my bottom.

Dad tripled his pace. Blow after blow, swat after swat, the paddle swished through the air only to slap against my bottom time and again with one resounding smack after another. I sniffled. Tears ran down my cheeks and sobs threatened to shake my body to its core. Silly pride, choked off apologies and pleas for leniency. Dad was only interested in putting a fire in my bottom anyway. He succeeded.

“Stand up,” Dad said, dropping the paddle to the side of his leg.

I pushed myself upright from the counter, allowing my dress to fall back down and cover my burning bottom from view. My hands stayed in placed on the counter’s edge for fear I would be unable to resist the urge to rub if they were not locked in place. I could feel the scrutiny of Dad’s gaze on my back, hear the tautness in his jaw as he opened his mouth to speak.

“Are you ready to do what you are told?” Dad asked.

I nodded my head, not trusting myself to speak.

“Yes,” I replied, my voice barely more than a whisper.

“I’ll clean up the mess now,” I said, reaching toward the can and cloth on the counter.

“First,” Dad said, making me pause mid-reach, “You’re going to strip right down to your birthday suit. Next, you’re going to fold every piece of your clothing very neatly, placing them on the counter top and then you are going to clean up your mess.”

Red hot blood rushed to my cheeks and I said, “But the buyer will be here soon.”

Dad said, “When you’re finished cleaning up your mess, you’re going to go stand in the living room corner and our prospective buyers will see that everything in this house is well cared for, even when it isn’t convenient. Am I understood?”

Still blushing, I nodded my head and said, “Yes.”

My trembling hands lifted my dress over my head. I reached around behind me and unclasped my bra, shrugging it off my shoulder and letting it slide off my arms, landing on top my discarded dress. My panties joined the pile a moment later after a quick swoop of my hands down my legs. Dad watched from the other side of the counter as I folded each garment and neatly stacked them against the back edge of the counter top.

Naked as a newborn, face and bottom flushed red and hot, I picked up the polish and cloth. Tears stung at my eyes, with the thought of my forthcoming humiliation before strangers. I sprayed cleaner and wiped circularly against the door, methodically cleansing it of the mess I had made. Regrets plagued my mind, but there was nothing for them. Dad had made up his mind and there was no going back.

A knock on the door, jolted my mind to the unavoidable present. I was nearly finished, leaning down and wiping away the last of the yogurt. My ears prickled hot at the sound of the front door clicking open. The clack of footsteps rang out from the entry way. I glanced down at myself, blushing hotter by the second as my gaze brushed over bare breasts and exposed privates. My bottom burned just a little hotter as if to remind me of its embarrassing display as well.

“Come on in, take a look around,” Dad said.
Posted by Ashley J

Ash, nice touch, dad must be really pissed off.
It would be a different world if such an act were possible.
Would I be more inclined to buy, if the lounge was decorated with a naked teenager?
Warm hugs,
Paul.

interesting,wonder if dad was overreacting and maybe a bit of a neat freak, or was her room really a disaster and she just shrugging it off and saying what he wanted to hear .
but she definitely showed attitude and Dad had enough

well written I enjoyed this one