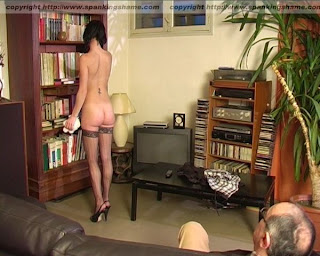 Well I can imagine the dinner went pretty well after her date arrived. It's a shame you don't hear more about parents pushing their daughters into this kind of arrangement for college. Save money, ensure someone will be around to keep an eye out for her, give her a chance to get close to the friend or relative she is staying with, etc. It's win win.

I can imagine the dinner well enough myself and in fact this story was hard to bring to an end because it seemed there was so much more to tell, but it always seems to be that way with short stories. As for the concept, it seemed intriguing to me and I agree it is surprising that more parents don't utilize such options even without the spanking clause.

Ashley, I have always thought this kind of scenario was more likely on this side of the pond.
I imagine that Ron would find the situation much to his liking.
He strike me as somewhat Dom-ish anyway.
Nice story Ash.
Warm hugs.
Paul.

this was a very good story, the guy in this story was not too strict (Mr. Faulkner)I was curious a little to see what was gonna happen after her date arrived but in saying that was still a fantastic story, very good descriptions... thank you for the short story