The Retreat And Jessica's Toil 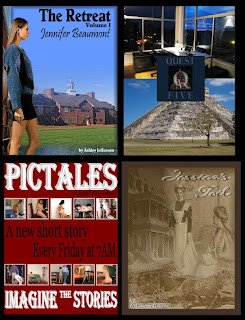 As some of you know, the end of the year holiday season combined with some minor computer difficulties to put me behind on a few things. I usually prefer to have stories done well in advance and pre-scheduled for posting, but of course that doesn't always work out. Fortunately, having some vacation time here in January has allowed me to get most things back on track. PicTales and Quest Five will continue on schedule without interruption and now I am getting back to work on two other projects I've had in progress since late last year. Can you tell I'm excited?
The first is the highly anticipated, The Retreat, a self-contained story, which can enhance the enjoyment and understanding of certain aspects within the Quest Five story. Neither story is dependent upon an understanding of the other, but for those who have been following Quest Five, you will recognize The Retreat as a related, but altogether unique story starring Jenny Beaumont, sister in law to Quest Five's heroine, Allison Beaumont. Jenny's involvement, albeit silent, in a scandal at Quondam Innovations involving the distribution of illicit images and videos depicting the corporal punishment (ie. spankings, corner time, embarrassing work assignments) of various employees, including those of Allison and her coworker, Kyra Jax results in an unavoidable trip to The Retreat. What happens inside The Retreat is best left to the story, but one can safely assume bottoms will be bared and bottom-reddening spankings will ensue. I am currently estimating an early February 2010 release date.
The second project is Jessica's Toil, featured above. Jessica's Toil is set in the aftermath of the American Civil War. Jessica, one of the many orphans of the war, is fortunate to gain employment in the household of a young master, struggling to restore his family's plantation to its former glory. Through a mixture of discipline and kindness, he teaches Jessica to want more from herself and for her life than can be gained as a simple servant and inevitably she falls in love with him. He might feel the same, but an arranged marriage to a spoiled and cruel young woman is perhaps his last and only chance to restore the plantation and his family's reputation. I am currently estimating a mid-March 2010 release date.
Posted by Ashley J

Yes I can tell your excited and I am also on the release of both The Retreat and Jessica's Toil. looking forward to both stories and am enjoying working on them with you

Ash, anything you write I will read with glee.
In other words I'm excited as well and somewhat envious of Al.
Is he the Alan of the Primrose Girls?
Warm hugs,
Paul.

Al, thanks for everything and yes, I know you are almost as excited about getting these out as I am.

Paul, I appreciate the support and hope none of the stories let you down. No need to be envious of AL though, he has to put up with me all the time. I'm horrible too, moody, annoying, lazy and the list goes on and on. Okay, maybe I'm not quite that bad, but it sounded good or rather bad. You know these things can be quite confusing at times. lol Thanks for the support.