PicTales: The Weight Of Time 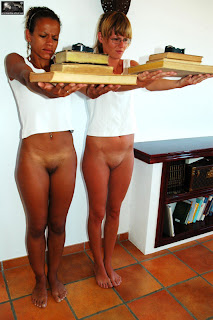 "Did you think I was joking?" He asked, his pacing footsteps clacking against the ceramic tile and echoing in the open room.
Joking? Him? Does he even have a sense of humor? Maybe you think sadistic urges qualify, but I'm going to have to disagree. There is absolutely nothing funny about this situation.
"I warned you, did I not?" He asked continuing to stalk the room.
That depends, does a cryptic stare and shake of your finger qualify as a warning? I thought he was just pointing with a shaking hand. I mean old people have that problem, don't they?
"I am a patient man," He said, stopping and turning to look at us with disapproving eyes.
You could have fooled me! I mean, he did fool me. One moment he is all smiles and happy, the next he is snapping fingers like pincers and growling like a rabid dog. If he starts foaming at the mouth, I'm dropping the books and running for my life.
"I understand the feelings of liberation," He said, staring at us.
Is he talking about the feelings of standing around half naked? Liberating isn't exactly the word I'd use, but then I'm not one wearing pants so tight the zipper might give at any second. Or maybe he meant libation. I think I've seen him adding a little something extra to his coffee.
"Your out from underneath your parents' watchful eyes for the first time," He said, nodding and sounding like he was attempting to relate with us.
Oh puhlease! His watchful eyes is much more active than my folks. It's like being away at camp only somebody gave this guy a strap and he thinks he can use it. Back home my parents wouldn't notice a thing unless I was late for dinner and even then they might not have woken from their typical catatonic state. Now that's an idea, this guy could seriously use some of Mom's medication.
"You want to have fun and I have nothing against you doing so," He said, resuming his pacing like a drill sergeant, with a strap bouncing against his leg instead of a baton.
Uh huh, sure, whatever. I'm gonna guess his idea of fun and my idea of fun are about as similar as fire and ice. You see the little up tick at the corner of dry lips? That's what qualifies as an old person smile and I'll bet he's smiling because this is what he calls fun. Anybody who thinks standing around half naked in a public space while holding heavy books up in the air is fun, has fallen completely off their rocker. I'm thinking he should never be allowed out of his.
"But when you prioritize fun over responsibilities, you jeopardize your future and when you jeopardize your future, you jeopardize the reputation of this institution," He said, shaking his crooked finger at us again.
I guess when you're ancient it's easy to focus on work and forget about fun because let's face it there comes a point when fun changes from partying all night with friends to having dinner with someone at four in the afternoon and reminiscing about the days when you partied all night with friends. Guess what? We aren't there yet and I'm sorry that he is, but seems like it should be more his problem than ours. Don't you think?
And don't even get me started on reputations. Can you imagine where mine is going to be when classes let out and everyone sees me standing here like this? Yeah, not good, not good at all. I don't give a flying... leap, yeah leap, about this institutions reputation when it's going to turn mine into a four letter word in about five minutes.
"When you show up late and unprepared to my class, you disrespect me, you disrespect this institution, and you disrespect yourselves," He said, stopping to stare each of us in the face as if we cared about his droning words.
When you take my clothes away, you disrespect me and when you disrespect me, I get even. That's right, I'm going to make him regret the day he was born, even if he can't recall when exactly that was. I don't know how, I don't know when, but he's going to get his. I swear it.
"As you paid so little attention to time earlier today, you will now give your full attention to it. Until the countdown reaches zero, you will keep those books balanced in front of you at shoulder level. When the time is up you will put the books away neatly on the shelf and come get me for your spankings." He said, sternly glaring at each of us in turn. "Hopefully this lesson in the importance of time will have a lasting effect on you."
My arms are killing me already and I've got to wait another fifteen minutes? This guy is completely insane. How am I supposed to keep them up for that long? Did you see that? This watch has to be broken, I swear the seconds are barely moving. As soon as he leaves, I'm putting them down. I don't care about his threats. How is he going to know anyway if he isn't here?
Oh crap! Classes are out, and here comes everyone. If I drop them now, some goody, goody will tell. This is so unfair. And did you hear him? He's going to spank us too? Somebody shoot me, please. I am never going to live this down, am I?
Posted by Ashley J

Ash, I'm beginning to believe that you have a wide streak of sadist in you :D
Warm hugs,
Paul.

Paul, I can't imagine what would give you that idea. Sweet, little me? You must have me confused with someone else. lol

Al, These stories are turning out to be quite a bit of fun. Sure glad I'm not the star of any of them. lol

Another good reason to buy hardcover books instead of paperbacks.

Ace, LOL. Right up until this very moment, I've always had a special fondness for hardcover books.