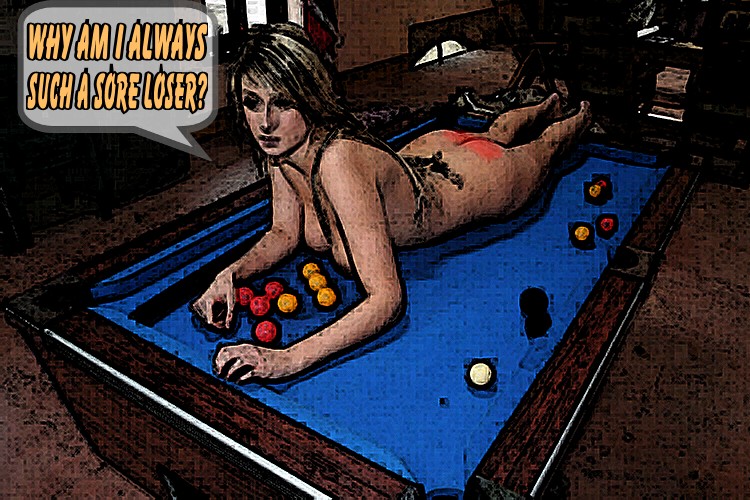 Her clothing laid in a pile on the floor and her arms were crossed in front of her naked chest. She frowned at her opponent, standing on the opposite side of the pool table. He still held a cue stick in his hand, the butt resting on the toe of his polished black boot while he chalked the tip. She huffed indignation in his general direction. All things considered, she found his lack of interest rude.
“Don’t pout,” he said.
Her tongue pressed against the inside of her cheek for the briefest of seconds. “You cheated,” she said.
“We had a deal.” He laid the chalk cube on the edge of the table before focusing his gaze on her. “You lost.”
Her eyes flicked to the partially drawn shade and the afternoon sun glistening in through the window. Parked cars filled the street in front of the house, but there appeared to be no one in the immediate vicinity. “It wasn’t a fair bet.”
“You shouldn’t gamble,” he said, “if you’re not willing to accept the consequences of losing.”
She frowned at him. “I didn’t lose.”
He took carefully measured steps around the table, closing the distance between them until the table no longer hindered his view of her naked body. “Then why are you naked?”
She cocked her head at him. “You’re the one who told me to strip.”
His eyes laughed. “Do you always do everything you’re told?”
“Like you were going to just give me my car keys and let me leave if I refused,” she said.
“There are consequences to the choices we make,” he said.
She shook her head at him. “Just get it over with.”
“Alright,” he said and tapped the blue felt of the table with the tip of his cue stick, “lay flat.”
Her eyes rolled toward the ceiling and she sighed. She placed her palms flat on the table’s edge and pushed herself upward, kneeling on the edge of the table. A moment later she eased herself down on the blue felt, shepherding the majority of loose balls in front of her and out of the way.
He laid his cue stick on the felt next to her. His steady fingers unfastened his belt buckle and he pulled the wide leather free of his pant loops with a fast and firm tug. The leather folded easily in half and he took position beside the table in easy reach of her bare buttocks. He smiled to himself admiring the soft roundness rising up from his pool table like a pair of milky white hills.
“This will sting,” he said. “Try not to kick my table.”
She exaggerated a yawn. “Maybe I should take a nap while you prepare yourself.”
He flicked the belt through the air, zinging it down against her cheeks. The sound of the impact fell flat with more thud than snap. Her buttocks bounced in the aftermath and a single red stripe rose up to decorate their central peaks. He flicked the belt again and this time it impacted with a loud, satisfying snap. A second red stripe rose parallel to the first, only brighter.
She gasped and blinked back tears stinging at her eyes.
The belt flashed through the air and snapped against her buttocks ten more times before he stopped. Each lash of the folded leather bit sharper into her fleshy bottom and bounced it harder. The red stripes overlapped each other until the central whole of her buttocks appeared as one wide stripe of redness. She kept her legs still and stayed down on the blue felt. The tears remained dammed in her eyes.
He ran his fingers through her long hair and bent down to kiss her soft cheek. “You can take that nap now,” he said, “if you like.”
She kept her lips flat, but her eyes were full of happy mischief. “Maybe I will, though it seems no matter what I do on this pool table, you always beat me.”
He laughed. “I can’t help it,” he said, “you’re such a good sore loser.”
Posted by Ashley J

The back and forth exchange between the two Characters was very good and interesting.
You been doing a fantastic job with your characters in these stories.
Looking forward to the next post
AL :)

Ash, very nice, that is the sort of bet that I like to win.
Love and warm hugs,
Paul.

Great story, I would have liked it to be less private, a party maybe at a pub? More detail about how and why she stripped - losing ?