Fit to be Spanked 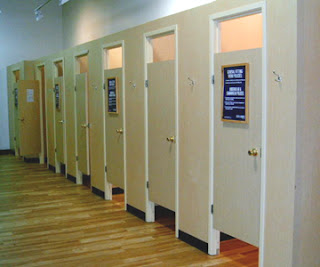 Nicole’s eyes popped in the direction of the narrow hall leading into the fitting room. The sound had definitely been coming from within. She gasped and her face flushed, embarrassed for the young woman with her naked butt thrust into the air. The other woman, the one wielding the ping-pong-shaped paddle, wore a name tag on her white blouse that read, Karen. She paused with the paddle raised high and smiled toward Nicole and her mother.
Karen said, “I’ll be with you in just a minute.” She refocused her attention on the bent girl and delivered the paddle with a resounding pop.
Nicole blinked in sync with the impact.
The bent girl emitted a little cry of discomfort. She lifted her hands from the tops of her black pumps, reaching as high as the back of knees. Her long legs bent and straightened while her dangling blonde hair swept over the carpet. She returned her fingertips to the pointed toes of her shoes. “I’m sorry,” she said.
Nicole tilted her head. Even she heard the attitude in the voice. More demand than apology. The bent girl’s face burned a brighter red than her bottom. Nicole imagined there was more outrage than pain coursing through the girl. Nicole glanced toward her mother, questions spinning around in her head. Was the punishment just or unjust? What did the girl do to deserve a spanking?
Her mother watched the scene, arms folded across her chest. She walked the few steps to the edge of the hallway. She spoke with the same loud voice she used at home when scolding Nicole. “That didn’t sound very sincere.”
Karen nodded. “Thank you. I can’t believe the attitude of the girls these days. No respect for authority. No respect for themselves.” She swung the paddle twice enhancing the pinkness covering the bent girl’s buttocks.
“My daughter and I were just discussing the very same,” Nicole’s mother said. “I couldn’t agree more.”
Nicole timidly walked and stood beside her mother. She could feel Karen scrutinizing her. Nicole quietly cleared her throat. Curiosity made her brave. “What did she do?”
“Do?” Karen asked. She slapped the paddle against the bent girl’s butt. “Why she did absolutely nothing. Isn’t that right, Miranda?” She swung the paddle.
“Ow!” replied Miranda. Her butt quivered and her knees bent and straightened. She sniffled.
Nicole watched Miranda’s buttocks glow redder.
Karen swung the paddle with force. “She didn’t sort the racks.”
The paddle popped against Miranda’s buttocks eliciting another, “Ow!”
“She didn’t clean out the fitting rooms.” Karen slapped the paddle against Miranda’s pulsating red butt.
Miranda grabbed at her butt, a sob racked her chest and sent a convulsion through her body.
Karen raised her voice. “Hands!”
Miranda sniffled. She resumed position touching the toes of her pumps with her fingertips. Her white top slipped, exposing her lower back and tummy. Her voice found contriteness. “I’m sorry. Please.”
Karen swung the paddle. “She didn’t help the customers.” The paddle popped against the red, naked buttocks. “And then she had the audacity to spew attitude at me when I confronted her about it.” She delivered a flurry of ten echoing, hard spanks.
Miranda sobbed. “I’m sorry. I’m sorry. I’m sorry.”
Karen stepped back and straightened her stance. “Stand up, hands on your head and plant your nose against the center of the far wall.”
Tears streaming down her face, Miranda straightened, interlaced her fingers on the back of her head and marched quickly to the far wall of the hallway. She sniffled, pressing her nose against the white wall. Nicole thought her butt seemed to glow even brighter against the sharp contrast. Miranda’s entire body trembled.
Karen waved the tip of the paddle at Miranda’s back. “Don’t even think about moving until I tell you. Understood?”
Miranda sniffled. “Yes, Mrs. Humphrey.”
Karen turned her attention toward Nicole and her mother with a smile on her face and the paddle still firmly held in her right hand. “Now, how can I help you?”
Nicole’s mother smiled. She lifted the outfits they had collected in the store. “My daughter needs to try some things on.”
Karen gestured down the length of the hall at the fitting room stalls. “The rooms are all available. Take your pick.”
Nicole’s mother nodded. “Thank you.” She fixed her gaze on Nicole. “If my daughter’s attitude isn’t significantly improved over a few moments ago, I might need to borrow your paddle also.”
Nicole gasped.
Karen’s eyes twinkled. “I’ll have it up at the register. Just send the girl to fetch it.” She walked out of the hallway.
Nicole bit her lip, cheeks flushed red. She reached out toward the outfits in her mother’s hand.
Her mother held them an extra moment. She nodded toward the bare bottomed, Miranda against the wall. “Give me the tiniest bit of attitude and you’ll be fetching Mrs. Humphrey’s paddle in your bra and panties. Is that understood?”
Nicole took a deep breath and nodded. “Yes, Mom.”
Her mother released the garments. “And don’t dally or I might just decide to paddle you for that too.”
Nicole rushed into the nearest fitting room. Her mouth remained open as closed the fitting room door. A hot flush colored her face. Her heart pounded in her chest. Even her ears felt hot. She hung the outfits on the hook and set about getting undressed. Mom was probably bluffing, but it wasn’t worth the risk.
Posted by Ashley J

Thanks for this new story.

Ash,
That was a Excellent story.
It had a lot of interesting elements in it that I thought was good and seemed effective.
Looking forward to future stories.
(Oh just wanted to say again you do pick awesome pictures that fit your stories very good).
Thanks for the story
AL :)

You fit so much content, both image and character into a short story! It is amazing!

This was a nice vignette from the world of your stories, although I find myself wishing Nicole did provoke her mother, and also wondering if her last name is Pickett. The setting and family dynamics do fit with a younger unmarried version of Nicole Pickett. Also thanks for keeping to the weekly postings again.

Al, Thanks. It can get hard to find appropriate pictures, but they do seem to grab attention.

Jim, Thank you. I'm glad you enjoyed it.

Vlad, I just wrote this as a short random scene, but I like the possible connection to the Pickett Family you identified. In re-reading it I find myself in agreement, this does seem like a little bit of a back story for Nicole. Thanks.

Ash,
you have a beautiful touch with short stories.
And I agree with Vlad, it does have a sense of the Pickett family.
Love and warm hugs,
Paul.

Paul, Thanks. I didn't notice the connection until it was pointed out, but I can certainly see it now. It's amazing how the subconscious mind works sometimes.

This is a superb little story. You tell as much by letting the reader supply more details. As good as you are with details, you have a real talent for knowing what to leave out. I just finished a story that takes place in a fitting room but the situation is very different.

This is a superb little story. You tell as much by letting the reader supply more details. As good as you are with details, you have a real talent for knowing what to leave out. I just finished a story that takes place in a fitting room but the situation is very different.

Bahama Girl, Thanks! Pleased you liked it.