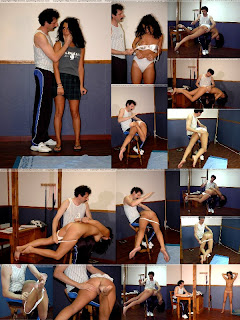 Spectacular story,
really liked the beginning of the story (her waking up realizing three things),that was great. The word you used Whacked real fit in this story brought something kinda unique to the story, at least in my opinion. Also like how she realized it was a setup.The way you put about the coach perfered his hand over any implement was awesome and unque.liked how she had to attend the game also
AL :)

Lovely opening scene, and a fun story, but the premise that a school would make a student go around naked for punishment does seem a stretch.

That said, I've come to regard you, Ashley, as one of my favourite writers of these kind of stories. I like D.J. Black's work a lot too, over on "A Voice in the Corner" blog.

Both of you write well and intelligently and know how to subtly "amp up" the factors that make spankings so appealing and fun on many levels.

Al, I kept thinking of a mafia hit the whole time I was writing "whacked" but it definitely worked in this story. Glad you enjoyed it.

Karl, Thank you, I'm pleased you enjoy my work and regard it so highly. I also think quite highly of D.J. Black's stories and I'm honored to be considered on par with his work. I like to explore characters and situations that stretch the limits while exciting the senses. In stories like Cedar Lake I don't intend for the reader to accept it as a real place, but rather as a fantasy world in which a whole new set of rules apply. Of course, such places are not always fun for everyone and I completely understand when a person finds a story just too fantastical to enjoy, but then there are plenty of stories that don't require such fantastic feats of the imagination.

I love stories which make use of extended nudity as a punishment. Looking at spanking fiction on the internet as a whole I think it hasn't been explored nearly enough. Maybe that is why some people find the concept so hard to accept. Perhaps someone reading this might use extended nudity in their own spanking story someday. In any case I hope to see it used more in the future.