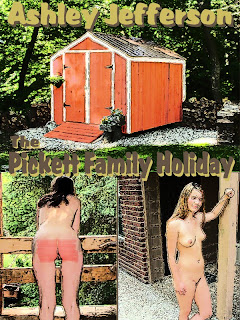 It's great to see you posting again and I hope normal service has resumed, or maybe a few extra catch-up posts (pretty please). I would be very sad if ITS went the way of Carl in the Corner.
This seemed like a pretty tame session for Stephanie but I sense a buildup and Nicole really deserves to make it a triple header, his push Tod a little bit more.

Ashley:
WELCOME BACK! Your loyal readers have missed you. At least speaking for myself. Great transition episode. You have brought us back with another tantalizing reference to Stephanie's private guilt, soon (we hope) to be revealed. You have established a sympathetic connection between Stephanie and Jason and have set the stage for a whole-family-present spanking for Nicole while alluding back to Amanda's recent discipline. And all with your signature attention to detail. Thank you for your superb entertainment and inspiration.

Dear Ashley,
I was concerned that the long silence was caused by health issues, which you had alluded to, rather than a sunny, restful, vacation, which I hope it was.
I have written before how much I enjoy these power plays in (fictional) family situations. They are not dark; the tone is light, the dialogues are witty, the style supremely elegant. Chapter 6 contained the best spanking scene I ever read (and I have read quite a few ;)
François

I too, feared for your health, but hoped it was just the normal holiday issues that kept you busy elsewhere.

Nevertheless, you come roaring back with another strong chapter! It truly was worth the wait!

Thank you so much for this and all your work. Welcome back and Happy New Year!

Ash, I can only repeat what the others have said, if you hadn't appeared this week, I was going to email you.
A great chapter, sets the scene nice for what is to follow.
I hope that you absence wasn't caused by health issues, and that you enjoyed a great new year.
Love and warm hugs,
Paul.

Excellent story so far.
I am on the edge of me chair LOL waiting for the rest
Thanks for the story
AL :)

Hi, you have a great spanking blog. I have a spanking video blog and i wonder ig you like exchange traffic with me.

If you like appear in my blog, please, can added your blog to this Trade: Spanking links

If you send some traffic you can appear in the first page and all page to!

Vlad, Sorry for the long delays, unfortunately they've been unavoidable lately. However, not to worry, ITS is not going anywhere nor am I. There are plenty more stories to come.

Bill, Thanks. I'm pleased with the way the story has developed and you're right, there is a lot of setup for some great things in these characters' futures.

François, My health has fortunately been better of late, but other things have kept me from getting completely back up to speed on ITS so far. Hopefully, I can get back on top soon. And thanks, I thought that spanking was a good scene myself, but I'm not sure where I'd rate it overall. It's nice to know it was enjoyed.

Jim, No, my health has been good, but I got roped into taking a condensed class to make up for classes missed last year. You're welcome of course and I'm thrilled you're enjoying stories.

Paul, Yes, there is definitely some good setup for much more to come from this family. And so far, I can't complain about the New Year. Hope yours is going well too.

Al, Try not to fall out of that chair, but you might have to wait a bit longer.

Spanking Tube, Thanks for the offer.