The Spanking Chronicles of Cedar Lake: The Easiest Quiz 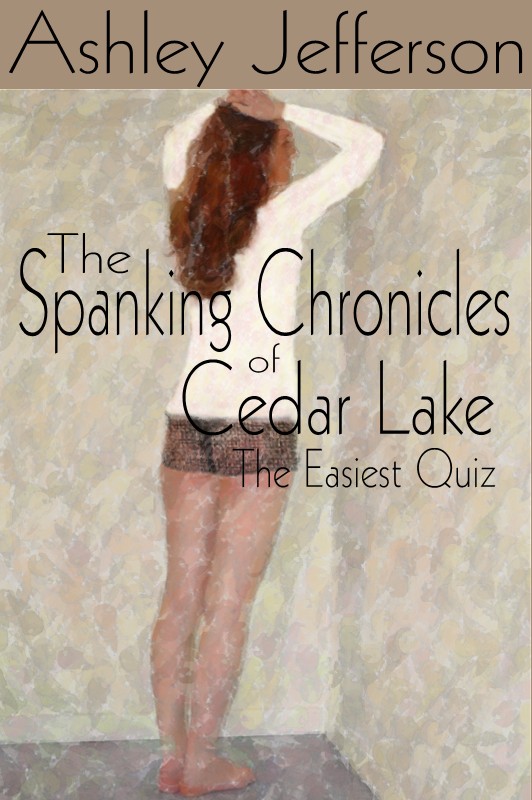 Nobody dies confusion as well! It's always a delight to read your work, and it's wonderful that you manage to produce as much as you do, even if it's not as much as you would like.

The Cedar Lake stories are definitely some of my favorites. This one was just as good as the others. I'm really looking forward to reading more in this series.

Ash, great to read you again.
The two male characters are most unpleasant.
This, however characterises your Ceder Lake stories.
Still I love your imagination.
Love and warm hugs,
Paul.

Another great ITS story! I look every day for a new story or chapter. Keep them coming!

Jason is more than a little slimy but I suppose his sort are a necessary evil if you want to set up a good girl for a spanking. The Cedar Lake stories have different feel from your family stories, which is probably a good way to flex your writing muscles.
I like the new blog theme, it seems to load a bit faster and popular posts is a nice feature. I,hope this blog work means we get a new post on Monday.

Cedar Lake is a rich vein of inspiration, worth tapping more for your readers’ pleasure. The reporters in that college are real nasty. I love it. In the paddling scene, you’ve used the inexorable reminder of the camera very cleverly to add to Tiffany’s embarrassment.
I am not a writer, and I couldn’t tell, but I guess one has to be in a certain mood for the muse of spanking stories to visit an author. Either she fires up your imagination, multiple scenarios well up, one captivates you for a time; or the quirky lady lays back, your mind is left to concentrate on worldly affairs. It’s best then to wait until she returns. Writing these stories cannot be a chore.
I understand the long silences. I pray though that your muse be always by your side.
:)
François

Alexd, Thanks. It is hard work creating all these stories, but very rewarding to know they are enjoyed and of course I love writing too.

Ace, Cedar Lake is definitely lots of fun for me to revisit. I like the environment and all the possibilities it opens up within the school setting. I'm sure I'll be writing more of them.

Paul, Sometimes I don't think I have enough real villains in my stories, but with these Cedar Lake stories I really like how some of the men come out as true villains for my heroines to overcome.

Bill, I'm doing my best to get some stories ready for posting again, but unfortunately it takes time. I'm not giving up though and I promise there are many more stories I'll be sharing here.

Vlad, Yes, it's a lot more engaging for me as a writer when I explore different styles and themes in my work. My favorite stuff to write has a scifi tint to it, but it's not always the best received of my work. I'll just have to keep working on it. And yeah, I was having trouble with the page loading too, so that's why I did the change. Glad it's doing better for you.

François, Inspiration can be a problem from time to time, but mostly the problems come in forms of stories that don't quite fit together right and I can't figure out how to fix them. Many a spanking story has died with many hours sank into them, but nothing worth sharing. Of course the trick to great writing is be able to write a good story whether or not the muse is whispering in your ear. I'm still learning.

This is one of your best stories, or at least it catches my interest. I love classroom spanking stories,especially with paddles. I remember getting paddled in front of the class, I'm glad I was not made to disrobe. If you are looking for story leads I like party spankings, couple spanking and switch roles are fun too. Love your story, looking forward to your next one. Question, how many of your stories are based on real event?