Shopping In The Red 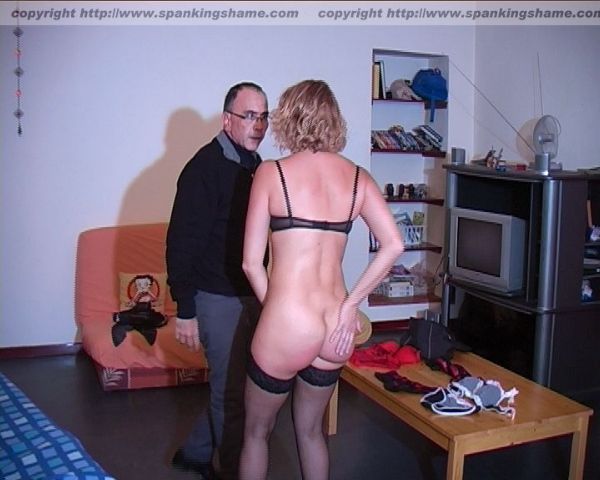 "It's called lingerie," I said, hands planted firmly on my hips.

"It's called a waste of money," He said, glaring up at me from the couch.
"That's your opinion," I said.
"It's also my money, which means my opinion is the only one that matters," He said.
I huffed and said, "Don't you ever get tired of that line?""
"No, what I get tired of is your attitude," He replied.

"I'm only reflecting yours," I said, tossing my hair and crooking my head at him.
He snapped his fingers and said, "You better watch your mouth, young lady. You're in enough trouble."

"Would you rather I forego underwear altogether?" I asked, shaking my head.

"Keep it up and you'll forego it for a trip over my knee," He said.
"You can't be serious. It was just a couple hundred dollars," I said, taking a step back.

"I gave you the credit card for emergencies," He said scooting to the front edge of the cushion, "not to go on shopping sprees when you got bored."

"That's not fair," I said.
"That I didn't give it to you for shopping sprees or that I think you went on one?" He asked.
I rolled my eyes to the ceiling and beyond. He was impossible to deal with when he got in these moods. My lips pouted and I tossed my hair again, allowing it to bounce against my frustrated cheeks. What was done, was done and I could only apologize, but if I did he would assume that meant he was right. No way was I going to give him the satisfaction.
"Nice," He said, "you want to roll your eyes and ignore me? Let me remind you I know how to get your attention, young lady. Get that skirt off and get over my knee."

"You don't want me to get up and do it for you," He said.
"You wouldn't," I said, eyes growing wide at the seriousness on his face.

He started to rise up off the couch and I said, "Alright. Alright. Geez, I'll take the stuff back if it's such a problem."
He took a half step toward me and grabbed my wrist pulling me to him. His free hand snaked around behind me and slapped the seat of my skirt three times with enough force to sting. I yelped and he said, "Yes, you will take those things back, but not before you've gotten the spanking you deserve."

"I'm too old for a spanking," I said, as if the declaration would matter to an ogre like him.

"You're too old when I say you're too old and judging by your behavior, that won't be for a very, very long time," He said, smacking my bottom a few more times to prove his point.

I tried to pull away, but his grip was like a vise on my arm. He wagged his finger in front of my nose, making me dizzy and said, "Now you're going to get that skirt off and might as well lose the blouse too, since you want to argue with me. If the next words out of your mouth aren't 'yes, sir' you can expect matters to get much worse."

My lips trembled, wanting to spew out anything, but the words he wanted to hear. I clenched and unclenched my fist and glared into his unblinking eyes. He was silently daring me to test him, almost eager to prove to me he was serious and in control. I swallowed a bit of pride and a lot more anger and said, "Yes, sir," as stiffly as I could manage. It's amazing how close it sounded to, "Go to hell," in my ears.

Staring down, so I didn't have to look at his smug face, I yanked the buttons of my blouse open one at a time. When the last button tore free and I shrugged the top from my shoulders and threw it at him, laughing when it landed as a cloak over his head. He tossed it across the room without a word while I fumbled with the waist of my skirt. Once free, I let it fall down my legs and then kicked it up in the air, narrowly avoiding kicking him in the shin. He snatched the skirt out of the air and sent it sailing to join my blouse.

I parked my hands on my hips again and asked, "Happy?"
He grabbed hold of my arm again and drag me back to the couch with him. Sitting down, he tossed me over his lap and laid his hand to rest on my panties, while I got a closeup view of the couch. He patted my tense bottom and said, "The day is starting to look up."

I gasped at the striking force of his hand against my backside. Clearly, he intended me to know he was serious about spanking. The speed at which his hand raised and fell, slapping my bottom into a stingy frenzy was almost certainly blurring. I cursed beneath my breath and prayed his hand burned and stung every bit as much as my bottom and maybe a little bit more. It would serve him right. Then again, life isn't fair and justice is blind and stupid.
I kicked and squirmed as his hand continued to spank. I kneed his leg and hoped for a bruise. He kept his rate steady and his spanks solid without any reaction though. Eventually tears stung at my eyes, but I refused to let them fall. I blinked them back with every smarting blow of his hand. Finally, he stopped and rested his hand on my panties, enjoying the warmth I'm sure.
"We'd be finished now, if you hadn't decided to throw all that attitude around," He said.

"You're the one with the attitude problem," I said. It sounded ridiculous, but it felt good to accuse him of something, anything.

He clucked his tongue at me and slipped his hand beneath the waistband, yanking my panties down, off my bottom. The coolness of his hand tickled against the heat of my bottom. I squirmed, embarrassed at the thought of what he could see and touch. His hand slapped against my bottom with a loud clap echoing off the walls and ceiling. Every one of my neighbors would be left without any doubt as to the happenings inside my apartment.
"Stop it," I begged.

He spanked me with the same regularity and rhythm of before. His hand seemed to be bouncing off my bottom faster than my wobbly flesh could bounce back. I began yelping with each smack, and wriggling to get free. My efforts were wasted. His hand never missed its mark and my bottom danced to his tune. The once held tears, slipped from eyes and dampened my cheeks. I blushed, embarrassed by my failure to withstand the childish punishment without reaction.
The last spank fell and he lifted me up off his lap. My panties had slid the length of my legs and been kicked across the room. I shook my head and bit my lip at the humiliating position I had left myself in. He stood in front of me, a light smile of satisfaction evident on his lips. I stared at the floor and tried to comfort my burning bottom with a gentle rub.

"Are you going to behave yourself now?" He asked.
I looked up at him with a mischievous smile and said, "Probably not."
Posted by Ashley J

spectacular story, she protested but in my thinking she actually new she deserved it and therefor when it was over she did not make a big deal of it, also liked the way he was in this, firm and not taking any lip from her. excellent title
thanks AL

Al, I'm still seeking the perfect combination between resistance and acceptance to make a great story. I think the spankee has to be a little resistant when it comes to a discipline scenario, but if there is too much resistance then it can cross the line between discipline and abuse. Such a delicate balance, but I will keep exploring it here and there. One of the fun things about these short stories is the ability to practice my writing and see how it fares with different techniques.

Ash, nice one girl, I can see you in this situation.
You know that you have it coming, but dammed if you are going to make it easy for him, brat him a little more, you hope you can take it.
After the spanking, you are feeling more than a little rueful. But you know when the heat cools and memory fades you'll do something to earn another spanking,
because it gives you a strange but fascinating tingle at the core of you. WEG
Warm hugs,
Paul.

I have been a silent admirer of your imagination, skill and generosity ever since the Primrose Girls. Your comment above is witness again to your professionalism. After publishing two novels and dozens of stories you tell us humbly that you are still practicing with your writing and assessing the result of various techniques. That’s what only true authors do.

You also raise an interesting point about resistance and acceptance, discipline and abuse. In one-to-one situations the plausibility of resistance becomes an issue. If it is genuine on the woman’s part, overcoming it is abuse; resistance otherwise is akin to the lack of desire ladies were supposed to manifest when courted by a lover in the pre-sexual revolution era. It is easy to say ‘no’ to a gentleman.

You can’t simply say ‘no’, however, when the social environment – family, entourage, tradition – encourages the corporal punishment of girls. The spankee is still free to walk out, which in my opinion means there is no real abuse, but the cost is high. And, of course, from the writer’s perspective and for the reader’s enjoyment a social environment supportive of disciplining girls allows the presence of witnesses and the development of many embarrassing episodes. You know this. You have superbly illustrated the possibilities in your novels. Many thanks for the hours of reading pleasure.

Paul, Truth be told, I'm not much of a shopper. When I find myself in trouble it's usually because I get my priorities a little upside down. I will freely admit I am a brat though and I've been known to brat much longer than is wise, well at least in regards to comfortable sitting anyway. lol. Glad you enjoyed it.

François, Thanks for taking the time to comment. It's always very encouraging to hear my work is appreciated and enjoyed. I really like your comparison of the resistance of a spankee to the courting methods of days gone by. I never quite thought of it in those terms, but I think it is almost exactly the same. The balance was so delicate and difficult to manage there were actually handbooks for men and women to explain the things they should do, say and write in order to facilitate a relationship without appearing inappropriate. Perhaps something of the same should be written for the spanking relationships of today. Hmmm, this sounds like another fun project to be considered.