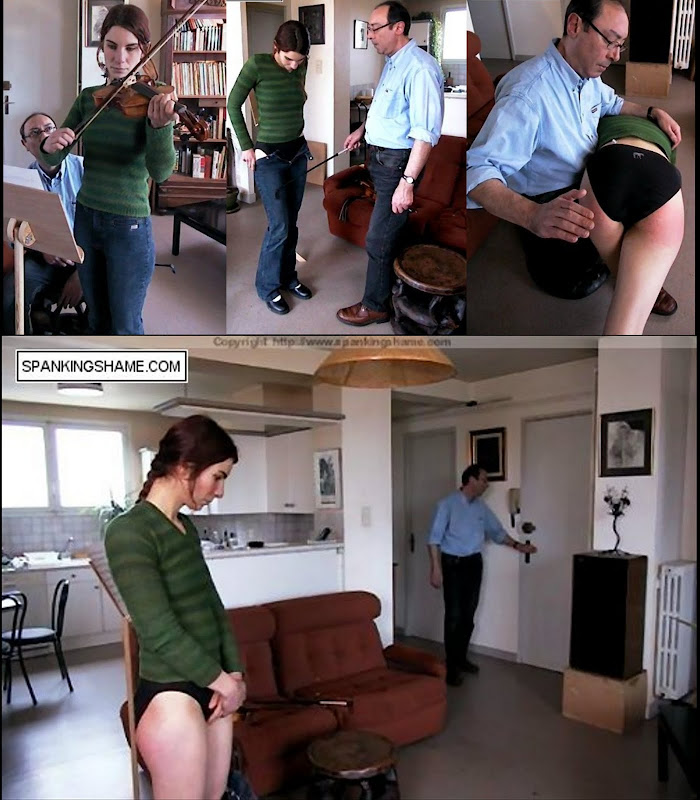 I stood stiff and straight, the violin tucked properly beneath my chin. My fingers held tight against the tension in the strings as I drew the bow across them. The notes whined in the air, the instrument vibrating against me, sending its echoes through my body. I felt all of it, but it was not what he was asking.

"No," I said, frustration creeping into my voice as I continued to play, "Am I doing something wrong?"
"Music is emotion," He said rising up from his perch behind me and standing close to my back. I could feel his breath on my neck, my skin prickling in response to his proximity. He said, "You play the notes perfectly, hold the rhythm without flaw, but there is nothing of you in this. If you want to be truly great, the music has to be more than the notes on the page. It must flow from your heart, not your mind."
"But how?" I asked, dropping the violin from my chin and holding it silent, dangling at my side.

"Your technique is not the problem," He said.
"I don't understand," I said, twisting to look at him behind me.
"Have you ever been in love?" He asked.

My face flushed pink with embarrassment, my gaze drifted downward, away from him and I said, "Of course."
"How did it feel?" He asked.

I raised my eyes to meet his and asked, "To be in love?"

"Yes," He replied and I shrugged saying, "I don't know."
"Were there butterflies?" He asked, wrapping his arms around me and gently caressing my stomach, through the thin material of my top.

I closed my eyes and pressed back against him. His body pulsed against mine. Every nerve tingled with electric passion. His breath felt like a cool summer breeze on my neck. My arms trembled and the violin felt suddenly heavy in my hand. A smile found its way to my lips and the frustration faded away, replaced by temptation.
"Yes," I said, answering him at last.
His hold loosened and his hands fell away, leaving me flustered and confused. He took the violin and bow from my hands, casting the instrument aside. Nervous, I turned to face him, but could not meet his eyes for more than a second at a time. Tears or laughter would have eased the tension between us, neither was forthcoming.

"Your emotions are raw, inexperienced," He said.

"I'm not an innocent," I said, my cheeks growing hotter.
"No one is," He said, whispering in my ear. "You must learn to call upon your emotions at will, focus them and allow them to flow through you and into the music."

"But how?" I asked and he replied, "I will teach you."
"Take them down," He said, taking a step back from me and pointing at my jeans.

I looked up to find a devilish grin on his face. My face flushed hotter and I resigned myself to complying with his demands. He had spanked me before anyway, although, never for such a contrived reason. My fingers obeyed and unclasped my jeans, slipping them down and leaving me vulnerable to his gaze and more. I bit at my lip, embarrassed, not because my jeans were lowered, but because all I could think about was his arms wrapped around me and his hands exploring my body.
He seated himself on a low stool, keeping his gaze trained on my blushing cheeks. My eyes danced between his face, his lap and the floor. He patted his knee, indicating he was ready for me to lay myself over his lap. I took a shuffled step toward him and leaned down toward his lap, until his strong arms took over, laying me against him. His hand caressed my bottom, easing me into a sense of safety and security.

The slap of his hand against my bottom jolted me from my dazed state. His spanks were not particularly painful, he was capable of much worse. He settled into a rhythm, alternating between cheeks and my bottom bounced to the tune. I stared at the floor, committing myself to take whatever he would give and without complaint.

"Do you feel the beat?" He asked, without pausing in his efforts.
"Yes," I said, appreciating the irony in his choice of words.
"And what else do you feel?" He asked.

"And?" He asked.
"Some pain," I said, although the sting was only minor.

"Good," He said, continuing to spank me in perfect rhythm. "Now listen to the music in your head. Feel the pain in tune with that music, in tune with the slaps against your cute, red cheeks."
I tried to do what he asked. My mind settled on a melody and I began to hum it aloud. The rhythm flowed through me and I could almost imagine myself twirling on a dance floor. His spanks complimented the tune adding a drum-like beat and my responsive gasps only enhanced the music further. We were dancing together, floating on a cloud with beautiful music connecting us.

A knock on his door brought the music to a grinding halt. His hand stopped its rise and fall, resting lovingly on my tender bottom. I blinked at the floor, saddened by the sudden interruption. He lifted me from his lap and stood to answer the door. I bent to raise my jeans back in place.
"Leave them," He said and I looked up at him with questioning eyes.
"It's merely an old friend of mine, come to visit," He said.
"But—

"He's seen it all before," He said.
I sucked in air trying to cool the hot blood rushing to my face. He unlocked the door and looked back at me before opening it. I resigned myself to the embarrassment and kept my silence. He nodded approvingly and then I felt it. The embarrassment, the shame, the approval, everything pulsing inside us was emanating in the silence, surrounding us in the room. It was as invisible as the air, but just as present.
Posted by Ashley J

another great story. Interesting way to teach a music lesson. Dancing together that was a nice touch there.
I see a lot more music lessons in her future...LOL
AL

Ash, you continue to surprise me, each short story different.
Each a cameo of a different situation, none unknown, but each beautiful and balanced.
Warm hugs,
Paul.

Al, I have a feeling she wasn't mind the lesson so much, although an audience was a little more than she bargained for.

Paul, It's far from easy to come up with a unique story every week, but that is why I'm using the images with each story. The details in the pictures set the scene and then all I have to do is find a way to put it all into some sort of context. For me, it's a fun and challenging exercise and I hope I can keep it going for a long time.