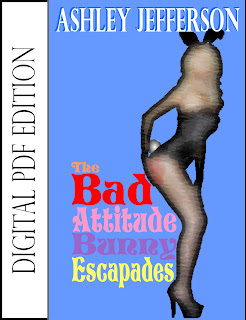 Try not to fall out of your chair and if you’re standing, I suggest sitting down because I’ve actually published a new ebook. That’s right, one of those Coming Soon spots at the top of the page has finally graduated to Now Available. It’s not a supremely long work, but rather a pair of longer short stories, in the neighborhood of 10k words each. And they are both somewhat featured around the upcoming Easter holiday, although really it was just a great excuse to get my two newest heroines into some provocative looking bunny costumes. I mean really, doesn’t that sound like a fun spanking outfit, especially if those ears can stay in place?
Here’s a little taste from “Bunny Money”  to whet your appetite;
The staircase spiraled up to the second level from the front of the restaurant, just to the right of the entrance. Slabs of bull nosed, two inch thick marble— the same imported blue-gray as the floor— made for highly attractive and slippery steps.  Decorative wrought iron with a matte black finish framed the steps as railing and rattled for attention under my cautious journey to the upper level. I tried not to blush too violently when I realized at a certain point of my ascent the patrons who must have been watching surely saw nothing more of me than my presumably pink naked buttocks, legs and ‘fuck me’ heels.
At the top, a glass door isolated the private upstairs room from the noises and scents of the bustling restaurant below. It also kept in the sounds from the private room as I quickly discovered opening the door and stepping inside. My eyes blinked involuntarily at the loud whap echoing in the mostly empty room. I blinked again at the sight before me.
The Blackburn’s occupied only the center space of the room, leaving much of the area empty. It appeared that four of our normal square tables had been pushed together end to end forming a long rectangular table, covered with a single lilac tablecloth. In total, there were only six Blackburn’s present, three men and three women. Four of them were seated comfortably at the table while one, the eldest man stood near the closest end of the table and the other, the youngest woman, laid her upper half over the near end. The man held a leather belt, doubled over, in his hand and the girl, no more than twenty-two, held tight to the edges of the table with her dress folded up onto her back and her yellow panties encircling her knees. Her bare buttocks showed the unmistakable marks of a belt lashing against the tender flesh. If I had any doubt, the tears glossing over her eyes while she stared at me with her cheek pressed against the table, illuminated the occasion as an unwelcome one. The man stopped swinging the belt and looked at me.
“I’m sorry,” I said, trying to keep my voice steadier than my fluttering heartbeat. It was hard not to feel like an unwelcome gawking intruder, particularly with my own public spanking from only moments before still burning in my buttocks. “I can come back in a few minutes.”
“Nonsense,” he said. His tone carried authority and confidence that only a man accustomed to power and success could even attempt. I presumed him to be none other than Roderick Blackburn. “Surely you’ve witnessed a spanking before?”
“I have,” I said. I stayed near the door still uncertain whether I should leave or stay. “I simply didn’t want to intrude.”
Roderick grumbled something incomprehensible and then louder, said, “You’re a servant are you not?”
For just a moment, I forgot how embarrassed I was to be standing there in the bunny getup. I took a step forward. “I’ve been called a waitress, a waiter, and even a server, but if you’re looking for a servant you’re not only in the wrong place, but the wrong century.”
The young Mr. Blackburn, probably in his early thirties, looked to me from his place at the table and said, “You’ll have to forgive my grandfather, he has the manners of a house cat on his good days.”
He was breathtakingly handsome with golden brown hair and expressive green eyes that felt like they were swallowing me whole. Maybe he wouldn’t have given me a second look in my regular clothes, but I still felt foolish, dressed as I was, under his scrutinous gaze. I was glad he had missed the spectacle downstairs and if it was at all possible, I wasn’t going to let him see the results of it either.
The Bad Attitude Bunny Escapades is available now at Lulu.
Posted by Ashley J

WOW! This sounds lovely, Ashley. I wonder what your bunny heroine did to receive a public spanking, and why do I get the feeling it won't be here last? Great work.

Michael, It's an entertaining pair of tales if I do say so myself. I won't spoil much, but you're right, she's got more coming than she's already had.

Paul, Thank you. I hope you thoroughly enjoy it.