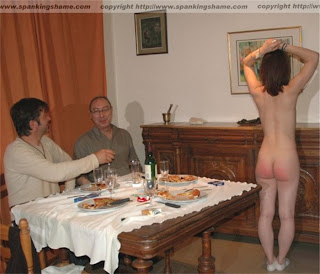 Ash
Thanks for the final episode in this story. Very well written story.
I liked the way the father said things and the comments she came back with and also liked the few comments the other family members made was quite comical
Thanks for this story enjoyed it very much
AL :)

Ash, I hope this story doesn't reflect any part of your upbring.
While the story is indeed brillient, the cruelty is rather too realistice for my taste.
This is high praise, I imagined myself in her place and I cringed.
Well done dear girl.
Have a great New Year.
Love and warm hugs,
Paul

Great way to end the story! I definitely felt some of that special satisfaction that comes with justice being served. The weekend long grounding was just icing on the cake. It does leave me wondering if April managed to keep out of trouble for the rest of the holidays though.

A fitting end to what has been a delightful story, Ash, and many thanks for sharing it with us.

This is one Thanksgiving April won't forget in a hurry, nor will anyone else present at the event.

Lessons WILL be learned, as April has discovered - she has also found how much her family love her; He who chastitheth, loveth.

Thank you again, dear Ash, for this and all your stories and articles. A Happy new - and productive - Year to you!

I fell in love again, dear Ashley: how could I resist April’s youthful rebellion within her acceptance of authority; her submission with her young dignity intact; her pride as she is wet, naked, spanked in public and made to apologise to grinning witnesses; her sarcasm to a younger brother, who has an erection seeing her exposed body (younger brothers are useful participants in the spanking of unruly females). This story evidences again your total mastery of the narrative, your brilliance with dialogues, your insight into the psychology of a very young woman undergoing punishment. Five stars to you.
François

Brilliant, Ash. Extended punishment scenes are hard to write, and this one is note-perfect. I also wish you a happy and productive new year.

Please let her mouth off or something ,this is worth keeping the theme going through the rest of the holidays.

Also a story idea ,
4 brothers are planing a supper bowl party for family. Their wives sabotoge it by cutting the sat cable,they are made to get naked and spanked with hand and belt, one brother gets the idea to load them naked into his work van and go to their fathers house.the dad finds it was the mothers idea and spanks her. Half time paddleings! Dad has the idea to cane all five women the combine number of the score(after game show) . Then they have to be naked till thier marks are gone. Please make it your own and post it on this site? Thank you onecrzdogman.

Wonderful finish to a great well told story of teenage humiliation. looking forward to whatever happens next on this page!

Al, I'm glad you enjoyed it.

Paul, I appreciate the wish and the praise.

Ace, I don't know about my April, but the real one was a perfect angel for the remainder of the year.

Hedgehog, You're very welcome and I'm pleased you enjoyed it.

François, thanks. I was very pleased with how April turned out and I'm glad her personality won you over. She is my favorite kind of heroine.

Michael, This one was definitely the longest single punishment scene I've written and it was not easy, but I was very happy with results. Hopefully I'm not pushing my luck to try again.

Onecrzdogman, Sadly, April's story is done for now, but I have a new story coming which should help ease the pain. Thanks for sharing your story idea.

Anon, Thanks. There are many more stories to come. I hope you enjoy them.