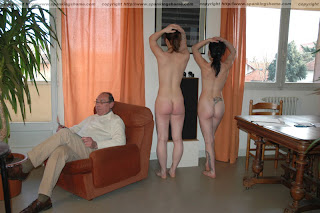 Ash, an idea that I've often considered.
Cheaper than prison and character building.
Are any of these stories going to be continued?
Warm hugs,
Paul.

good story...definitely little different then the previous stories...always like reading the different ideas you come up with...look forward to more stories to come,liked how you protrayed this character too
Al

Paul, It's a popular concept I think. I recall a few years ago it was brought up as an idea to discourage young people's involvement in gangs, but as would be expected, it failed to gain popular support. I don't plan on specifically continuing any of the PicTales however some of the concepts like this one might be explored more fully in a longer story at some point.

Al, I know not every PicTales story will appeal to all, but I'm really enjoying the ability here to explore some different concepts in shorter stories before committing to something longer.

Someone once told me that parole officers can technically spank in 3 states. I don't know if this is true or not but I have to assume it'd be rare even if allowed by law. Currently in most states Judge's can offer lighter sentencing in exchange for doing community service at a certain place or completing a self improvement program somewhere etc. One such program I read about is the "Heartland Women's Program" for women 18 years of age or older. Available for viewing on the site is a lengthy pdf file with a huge list of rules for women who attend. Dress, attitude, chores, quiet time, etc are all here. Phone calls and visits from family are privileges to be given for good behavior as well as being allowed to leave the house. Heres a random quote from the pdf:

•Ladies are not to leave the home without the permission of staff.
•Upon entry, all clothes and luggage will be inspected. As well as after shopping trips, visits, or home visits. HWH reserves the right to search the women’s rooms or personal belongings if such a search is deemed necessary.
•Ladies will submit themselves to random drug tests at the discretion of the staff.
•Ladies are allowed one cup of coffee or one soda a day. This is a privilege. If the privilege is abused it will be taken away.
•The covering up or harboring of another’s wrongdoing translates to you joining in the wrongdoing, and will be dealt with accordingly. We are to expose sin, not cover it up.

There is a section covering discipline but it doesn't mention spanking. However it does say "Each lady is treated as an individual and may not have the exact same consequence as another student." This women's program was created by Heartland Ministries, who also made Heartland Christian Academy, a school which has been in the news numerous times due to it's use of excessive paddlings.

I have always believed wives spend to much of their husband's hard earned money the credit way. So the judicial courts should allow their husbands to discipline the errant wives, by approving the corporal punishment way. Namely a good spanking be it with a hand, hairbrush, paddle, birchrod, or cane, on their bare bottoms. For me, I would give each naughty wife six of the best with a pliable cane on their tender bare bottoms.

Ace, I've read that spanking is still technically legal in some U.S. prisons and jails, although not actually still in practice, the laws permitting it are apparently still on the books and unchallenged. I would imagine if that is true then it is not much of stretch to think parole officers could do the same. However, I would guess it is probably like the prison situation and although technically legal, not in practice. Then again, it was in the news not so long ago about a judge using spanking in his chambers as a way of mitigating sentences for young offenders. The interesting thing about that story was while publicly everyone frowned on the situation, it was apparently not against the law. I have heard of the Heartland thing before as well and to me they sound like a very scary group of religious fanatics, not my cup of tea at all. Spank me all you like but please, oh please, don't make me pray for forgiveness. lol.

Six, That was in fact the way of things in the U.S. until the late 19th century. Men could bring their wives to the courthouse on Sundays after church and legally "whip" them on the courthouse steps for offenses ranging from gossiping to laziness, and yes even spending too much money.